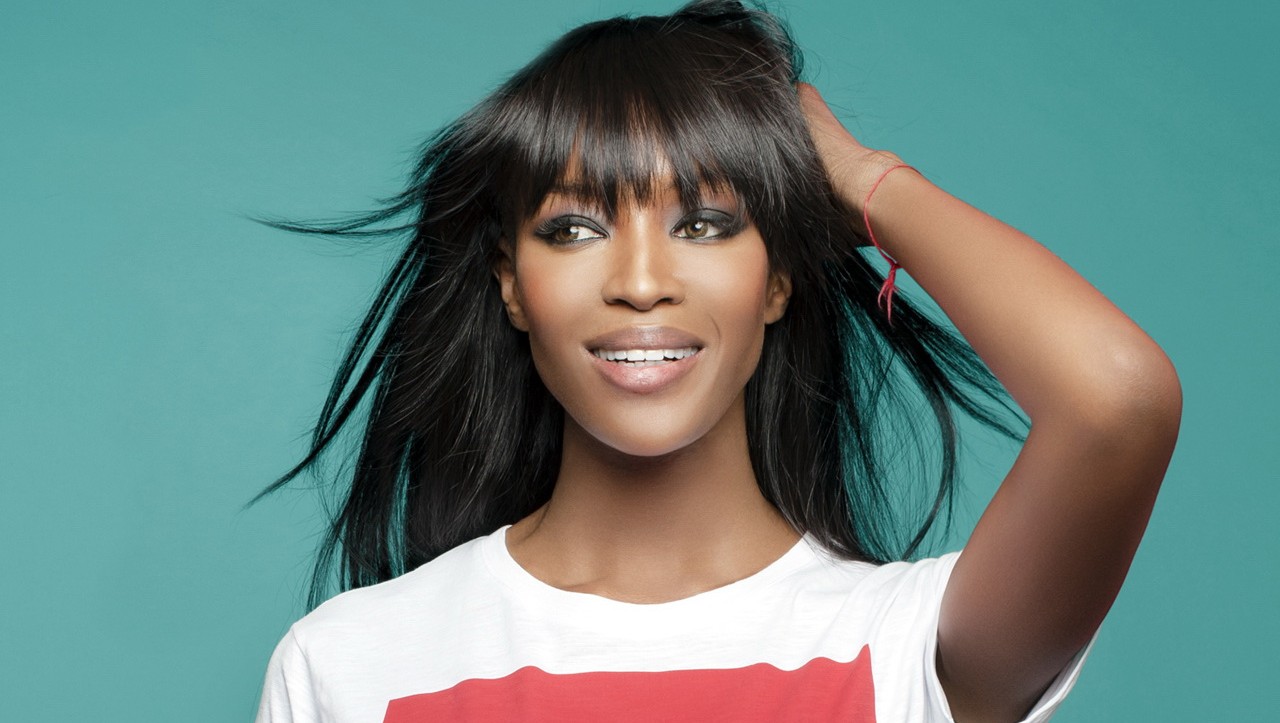 Naomi Campbell was born in 1970  in Streatham, London. She has chestnut hair and brown eyes, but she wears colored contact lenses, blue and green. She studied at Dunraven School and the London Academy for Performing Arts, Italia Conti Academy stage school and appeared in music videos for Bob Marley. Then, she was discovered at the age of 15 while walking in Covent Garden, by Beth Boldt of the model agency Synchro.

After being discovered she was signed on by the agency and her career quickly took off. She traveled to Paris regularly and meet Azzedine Alaïa, who she became close with and meet many celebrities through him.

Through the 80s and 90s she gained the status of a top model and was considered one of the six models of her generation declared supermodels by the fashion industry. She walked the catwalk for designers: Gianni Versace, Azzedine Alaïa, Ralph Lauren, BlueMarine, Alessandro Dell’Acqua and Isaac Mizrahi. Also, she has modeled for famous photographers such as Peter Lindbergh, Herb Ritts and Bruce Weber.

In April 1992, she appeared on the hundredth-anniversary cover of American Vogue, shot by Patrick Demarchelier, with several other top models. And a year later in 1993 She famously fell on the catwalk in Vivienne Westwood‘s foot-high platform shoes, which were later displayed at the Victoria and Albert Museum in London.

Through 1998 to 2009 there were several cases after being accused 11 different times over the years of acting out against employees, associates and other individuals. She was convicted in Toronto in 1998 of assaulting her assistant with a mobile phone. By 2006, several other employees had come forward with claims of abuse. She has pled guilty at least four times and has attended anger management classes, completed community service ?and paid fines. Along with this, she was banned from British Airways after an incident mid-air.

Elite Model Management, which had represented Campbell since 1987, fired her in September 1993, on the grounds that “no amount of money or prestige could further justify the abuse” to staff and clients. Elite founder John Casablancas described her as “manipulative, scheming, rude and impossible.” She was known for her whimsical temper and jet set love affairs including the boxer Mike Tyson, the dancer Cortes, the entrepreneur Flavio Briatore, and Usher.

Naomi decided to diversify her activities, and, with her colleagues Elle McPherson and Christy Turlington, started the Fashion Café. The business venture was not successful and the directors were arrested for fraud, bankruptcy and money laundering in 1998. Then, she co-wrote the book Swan, recorded a couple of songs and created the album Babywoman. Also, she has participated in the videos of famous singers like Michael Jackson, presented her own fragrance, and had a doll and a wax statue at Madame Tussaud’s reproducing her features dedicated to her. So far, the thing she does best remains on the runways.

For over twenty years, Naomi Campbell has worn clothes that designers put on her, but also interpreted them, giving them life. In 2007, she walked the catwalk for Dior‘s 60th-anniversary fashion show at Versailles.

In 2013 she launched her reality series, The Face. The series is about a group of aspiring models competing against each other. Campbell is the producer and a coach for the show.

In 2014, at the age of 44, Naomi is ready to go permanently down from the catwalk and to get behind the scenes of fashion, and opened a charity shop in London’s Westfield shopping center, called Fashion For Relief. The shop also sells fashion clothes and accessories to celebrities and friends as Kate Moss.

Fashion For Relief has presented shows in New York, London, Cannes, Moscow, Mumbai  and Dar es Salaam, and has raised millions of dollars for various causes. Campbell has remained an activist who has fought for the welfare of children in Africa alongside Nelson Mandela since 1997.

Between the end of 2015 and the beginning of 2016 a wide range of products signed by the model is launched for TCC, a leading company in loyalty programs. The products, including jewelry, textile articles for the house, bags and luggage have been used by retail chains, franchise or not, to reward customers in loyalty campaigns.

In 2017 Campbell launches silver jewelry and luxury gift items, becoming an ambassador of a brand that is launching its first store in Northern Ireland.

By 2018 Naomi Campbell has graces the cover of over 500 magazines, walked the runway for countless luxury brands, and has continued her charity work in South Africa and around the world.