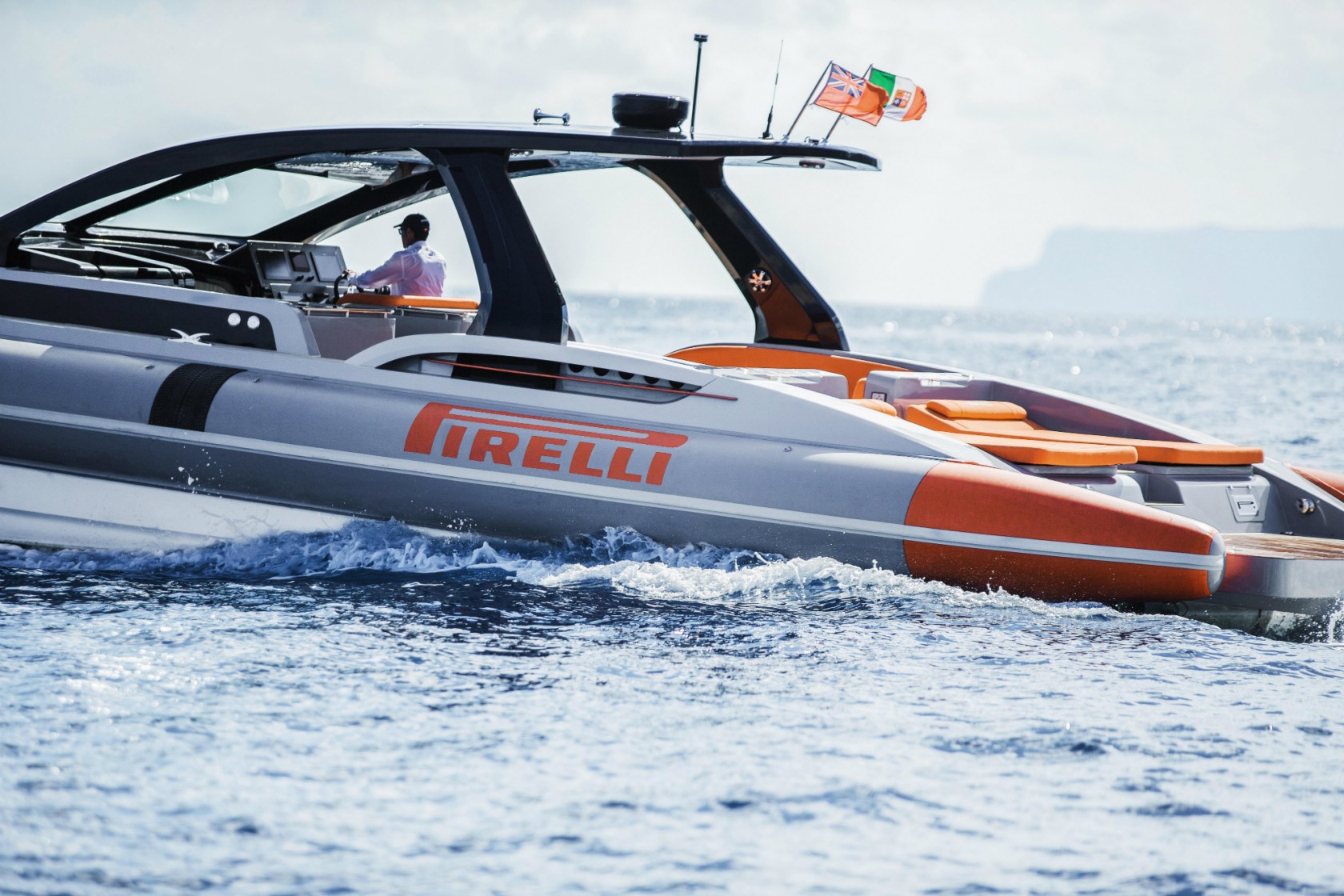 Founded in 1872, Pirelli is one of the world’s leading tire manufacturers, with 19 plants in 13 countries and a commercial presence of over 12,500 stores in over 160 countries.

Specialized exclusively in tires for cars, motorcycles, and related services, it is the only one in the industry to be a “pure consumer tire company”.

the company boasts a distinctive positioning in the High Value tires, products with a high technological component in which it has over 1,900 approvals thanks to a consolidated partnership with the most prestigious manufacturers.

Active in motorsport since 1907, the company is also present in over 460 motor and motorcycle championships, including the Formula 1 World Championship, of which it is the exclusive supplier since 2011 and represents a constant challenge in terms of technological innovation.

To achieve the highest levels in terms of performance, safety and containment of environmental impacts, the company has always been strongly committed to Research & Development. In particular on High Value tires, an area in which, over the last three years, it has invested an average of 7.4% of the relative revenues, one of the highest levels among the world’s largest producers in the sector.

The combination of Pirelli-clothing was born in 1877 in the factory founded by G.B. Pirelli for the processing of rubber, which kicks off the production of sanitary ware and haberdashery: overcoats, capes, coats for travelers, coachmen and soldiers. Technical, reliable, well designed and realized garments.

Over time, the Pirelli brand acquires a more and more glamorous aura: first with the famous calendar, and in more recent years with a communication strategy that involves great photographers and plays the cards of irony and sex appeal (as the image of sprinter Carl Lewis in start position and with stiletto heels, made by Annie Leibovitz in 1994).

Following the launch of the first calendars, according to a market research, the three adjectives that the public attributed to Pirelli were: glamor, sexy, fashion.

At the end of the 90s, the project was born to create a series of clothing and accessories that was no longer just technical, but also distinguished by a strong reference to the Pirelli world (the tread as a graphic inspiration, rubber as leitmotiv material) and a high design content.

In January 2002, the first lines of footwear for men and women under the PZero brand were presented. They were inspired by the technical sailing shoes in which the sole resumed the design of the tire tread created for Ferrari, the PZero, from which it took the name.

The success is such that, the following year, a line of clothing will be launched by Allegri and subsequently the watches were produced by Sector Group. These licenses were then followed by that of the glasses with De Rigo and that of children’s shoes.

The distribution was entrusted to multi-brand stores and to the Flagship Store in Milan. Among the foreign markets: France, England, Sweden, Spain, United States.

Afterwards, PZero brought back the production of sneakers and also the clothing industry.

In 2016 Pirelli PZero takes the name of Pirelli Design which is born as a natural evolution of the previous Pirelli PZero.

In keeping with their focus on the Prestige and Premium car segments, its objective is to enhance the Pirelli brand by developing targeted design projects that take advantage of the company’s technological know-how, together with selected partners representing the excellence in each sector of reference, in order to offer unique, iconic and unrepeatable products.

With this spirit, in 2017, collaborations of excellence were born, such as the one with the Maison Roger Dubuis, pure and extreme expression of the watchmaking manufacture with a strongly sporty spirit.

Together with Pirelli Design, Roger Dubuis conceives the Excalibur Spider, a collection of limited-edition 8 and 88-piece watches featuring a strap made from the blend of a Pirelli tire that has competed and won car races in major competitions. motorsport.

This collection will be followed in 2018 by Excalibur Spider Skeleton Automatic in elegant black titanium with intense blue or white-white accents of your choice. In these last Pirelli special editions with the Caliber 820SQ, the skeletonized and fluted titanium bezel with black DLC coating is completed by a overprinted crown of blue or white rubber, coordinated with the blue or white stitching of the strap.

To seal the union are the legendary motifs of the tread that reproduce the trace of the Pirelli CINTURATOTM Intermediate tire.

It is a ski in a limited series that guarantees a high level of performance with more pronounced sidecuts than normal to better adapt to the different snow conditions ensuring speed and maneuverability.

This ski was born from the partnership between Pirelli and Blossom, a leader in the “hand-made” construction of highly performing skis in compliance with the great artisan tradition of Val Chiavenna.

Within the sandwich construction of the ski, characterized by the superimposition of layers of various materials, they inserted an anti-vibration rubber layer that allows to damp up to 60% the energy of the stress suffered by the ski during the descent.

The end result is a ski that allows the skier to have excellent performance in both short and long-haul corners. As a result, skiing is safer, more fluid and more precise, guaranteed by the exceptional stability of the ski.

Identified by the iconic P logo of the long episode, it is presented in 7 colors inspired by the colors used by Pirelli to distinguish the competition tires. Each color is made in a limited and numbered series of 110 pieces in honor of the Pirelli Motorsport anniversary that in 2017 turns 110 years of activity.

In mid-2017, Tecnorib, one of the leading companies in the sector and already licensed for the PIRELLI inflatable boats for several years, launched the new PIRELLI 1900 model at the Cannes Boat Show, the new flagship that completes the range of inflatable boats. PIRELLI brand.

The new boat collects the legacy of the models that preceded it, enhancing their experience, know-how and technology, but adding for the first time to the strongly sporty DNA a liveability from a large yacht.

The Pirelli 1900 is immediately recognizable by a new unique design element reported on the rubber dinghy tube: the tread pattern of the Cinturato ™ Blue Wet wet tire, used in the highest track competitions. A true tribute to the expertise gained by Pirelli in terms of tires from “extreme wet”.

In the second half of 2017 at Eurobike, Pirelli Design presents the capsule collection of cycling clothing developed with Castelli, the first brand to bring innovation in cycling clothing and Italian company with more than forty years of history that is used to test the its products with the greatest professional cyclists.

The company returns to the cycling world not only with P ZERO Velo bike tires but also with a special clothing line dedicated to the most experienced cyclists, who seek maximum performance not only in the choice of their tires but also in their garments, in which they seek maximum quality and also style.

The new garments are inspired by the P ZERO Velo tires and feature a color code that recalls the language of its treads: silver for Road Racing, red for the Chrono and blue for the Four Season. The flagship product of the collection is the Aero Race 5.1 Jersey. The fabrics used on the front and rear showed a saving of 22 watts in the wind tunnel compared to a normal cycling jersey at 40 km / h. But it’s not just aerodynamics, it’s also comfort and durability.

At the end of 2017 the company was officially selected as the sole tire supplier for all motorcycles produced by the Schiranna company. This means that all the models currently in production, and those that MV Agusta will commercialize in the future, will fit Pirelli tires as original equipment.

The collaboration between two top-of-the-range and Made in Italy companies has been sealed with a limited edition of a very successful model, the Brutale 800 RR, customized by the Castiglioni Research Center in collaboration with Pirelli Design, the specialized Bicocca laboratory in the design of design projects with excellent partners.

The result of this synergy is the “Brutale 800 RR PIRELLI“, as this version of the naked varesina was truly exclusive for the set-up, components and production in very few units and was presented at the EICMA in November 2017.

The customization of this limited edition model focused on components and colors. The saddle, for example, was created specifically for the Brutale 800 RR PIRELLI and stands out for the matching stitching with each of the two color versions proposed. The support of the front optical unit is painted black, as well as the rear frame.

The tires obviously also play an important role: compared to the standard model with DIABLO ™ RED III original equipment tires, the Brutale 800 RR PIRELLI is fitted with DIABLO ™ SUPERCORSA SP tires in sizes 120/70 ZR17 front and 200/55 ZR17 rear with the 6 “back circle specific for this model.

The colored tires (optional) will be respectively with red or blue band, depending on the chromatic version to which they are combined.