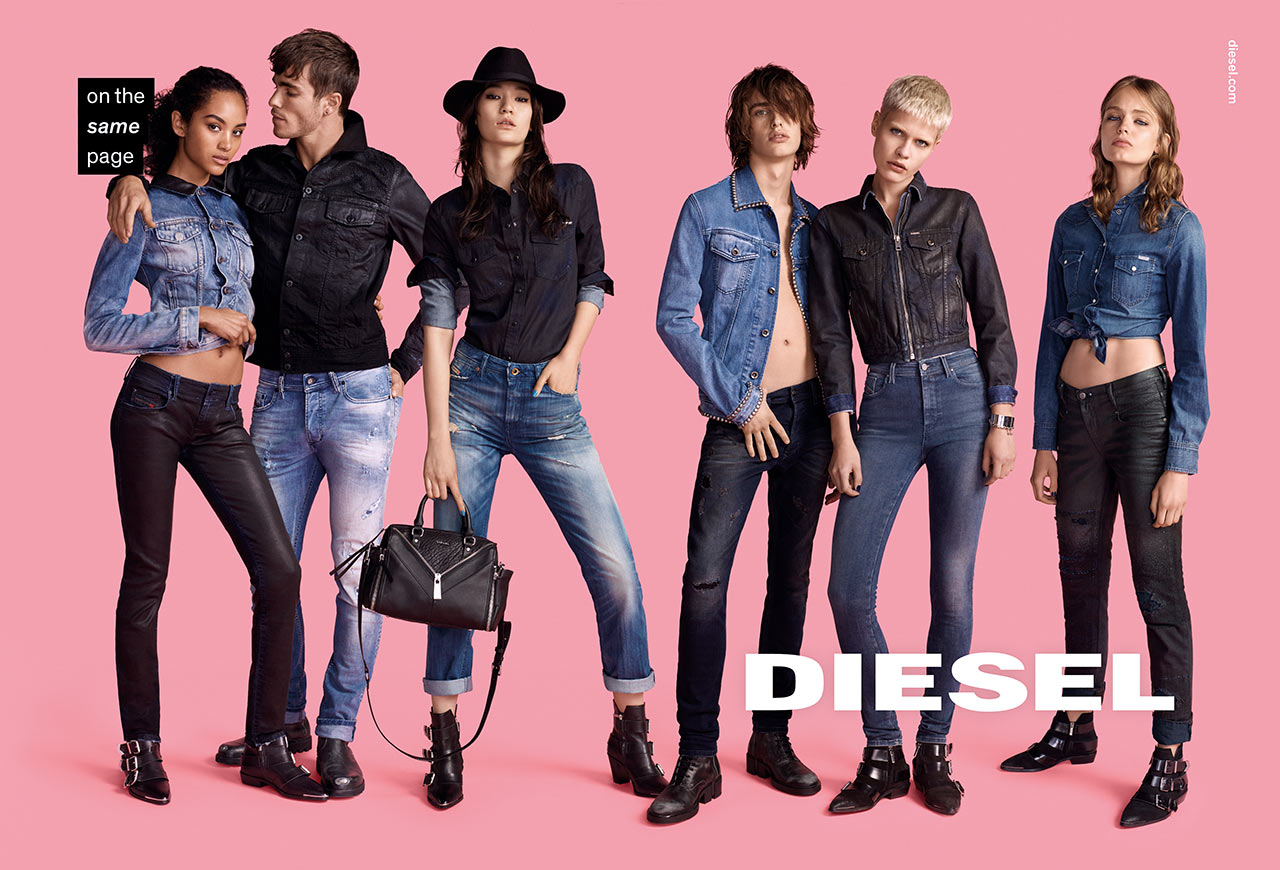 Diesel was established in 1978 by Renzo Rosso together with other textile entrepreneurs in the Veneto. He chose this name because it is easy to understand and is pronounced the same around the world. At that time, Diesel was also considered as an alternative energy and so the word stood as a synonym to alternative taste in fashion. In 1985 Renzo Russo acquired full control of Diesel.

In 1991 Diesel launched its first advertising campaign called For Successful Living. The campaign did phenomenally and established a reputation for innovative marketing. Then, in 1995 the brand launched its own website, it was amongst the very first fashion companies to do so. Later, in 1996, the brand opened its first few flagship stores in New York, Rome and London.

In 2000 Diesel acquired Staff International, an Italian manufacturer and distributor of Maison Margiela, Marni Men, Dsquared2, Just Cavalli and Vivienne Westwood. Two years later Renzo Rosso became a majority shareholder of Maison Martin Margiela. In July 2000 Diesel Iberia, the 12th foreign subsidiary, expands further in the Spanish market. In Barcelona, it opens a new showroom with offices in Plaza de Cataloea. In Spain there are 350 single-brand boutiques and 12 more are expected within 2004. The turnover in Spain is equivalent to 17.6 billion liras. Later, Renzo Rosso, number one and president of the group, announces that Diesel’s global turnover for the year is expected to be 700 billion liras.

In September Kosta Murkudis, a young Greek designer, is appointed creative director of New York Industrie, the casual clothing line produced by Diesel International. In addition to creating the men’s and women’s collections, the designer will supervise the advertising campaign. He appears on the cover of W, the monthly of Women’s Wear Daily, an honor that fell to Tom Ford in July.

Diesel receives the Made in Italy award, a prestigious American prize within the fashion industry in January 2001. The company intends to expand further in the U.S. It was reported sales increased by one-third over the previous year. Also, by 2004, somewhere between 10 to 35 new shops are expected. At Pitti Bimboin June 2002, the company presents Diesel Kids, a celebration of denim. Every imaginable kind of denim is presented, with infinite variation, from stonewashed to torn and color-sprayed models.

In July 2002 the company is a sponsor and partner of the Trieste agency Eve, which has conceived and organized the first presentation of an award for young creative designers, called It’s One (International Talent Support), which is to be followed each year by It’s Two, It’s Three, etc. Wilbert Das, the creative director of Diesel, has worked with Victor Bellaish on the selection of 33 finalists from all over the world. The award, won by Einav Zucker, consists of €13,000 with which the winner can start his own atelier and create a new Collection for the following year’s competition. The Diesel Award, for €2,500, which went to Daniele Controversio, offers the opportunity to produce and distribute in the best Diesel shops a mini-Collection of 5 pieces labeled with the name of the young designer.

In 2002 Renzo Russo founds the OTB group which became the parent company of fashion brands Diesel, Maison Margiela, and companies Staff International, specialized in ready-to-wear production and distribution. OTB group acquires the maison Martin Margiela. This Belgian designer, who went to school in Antwerp, already an assistant to Jean-Paul Gaultier, works for Hermés, but since 1988 has also had his own maison in Paris. But he needed a strong partner to help him develop further, and he found one in Italy, in the person of Renzo Rosso. The head of Diesel intends to promote a five-year development strategy for the brand.

In September 2002 DieselStyleLab, the men and women’s avant-guard line, chooses New York for the first time and returns to the runways of the Bryant Park Pavilion after several years away, for Mercedes-Benz Fashion Week. The line was launched in 1998 but, after having presented in London (September 1998, October 1999) and Paris (October 1999), it undergoes a period of static presentations during Milan’s Fashion Week.

Forbes magazine lists Diesel among the 32 top luxury brands. The return to the formula of runway presentations and the choice of New York also indicate a strategic change and particular interest in the American market. The Collection is often inspired by the aesthetic-cultural contrast between East and West, as in the typical black leather jacket manufactured in a Japanese fabric with kimono-shaped sleeves.

Back in 2001, Diesel’s U.S. turnover hit $93 million, an increase of 43%. By October 2002 the company receives “high profits with double-digit growth in sales, an increase of 10% over the €365 million of 2001, which had already increased 38.8%.” This is the Diesel group forecast for 2002, as declared by Renzo Rosso at the Milan Fashion Global Summit. The group plans a thorough review of the points-of-sale, in which the single-brand shops, of which there are 180, including 95 company-owned, are to be favored over the multi-brands.

In June 2003 Daniele Controversio, winner of the Diesel Award 2002 in Trieste, joins the creative staff of DieselStyleLab. Also, the women’s shoe Collection by Diesel receives a prize at the Sportswear International Fashion Awards (SIFAS). Diesel shoes are manufactured under license by Global Brand Marketing Inc. of Santa Barbara, Calif., which sells its products in more than 130 countries. It owns the Pony and Dry-shod brands and is a licensee for Nautica, Mecca, and Xoxo shoes.

In September 2003 Australia is Diesel’s new target market. The first store opens in Sydney. Another one is to open soon in Melbourne. In December The turnover is reported €780 million, of which 85% comes from abroad. The gross operating margin of 22%, with a net profit of €74.8 million, almost hits 10%. The cash flow is €120 million. Renzo Rosso’s motto;

“Fashion companies must be directed by their managers. Real industrial managers must lead their companies and make every single area more professional. That’s what I did.” As to decentralization, he maintains that “some production cannot continue here: it is the price market’s rule. If you go too far away, you won’t survive. The important thing is that the brains stay in Italy.”

The brand portrays itself as someone who questions current trends, while allowing their own taste to lead them. The message communicated is usually a mix of irony, black comedy and tongue-in-cheek humor that garners both praise and backlash. This combination of rebellious image with the classic 1950’s American culture has introduced some of the most timeless pieces, such as, biker style, leather jacket and the denim.

“We think to be cool is better than to be big”, said Rosso. It is really time for the brand to become cool and fresh again and so the current rebooting strategy of Diesel is not about change; it’s about going back to the origins. The interest of the brand lies in culture, music and people. The challenge lies in breaking down people’s existing perceptions of Diesel, instead make them feel extraordinary.

The cohesive collection of Diesel sets itself apart from the rest by introducing an ‘alternative taste in fashion’. Their main power lies in the transformation of the year old working class look into luxury. They thrive on breaking the societal stereotypes through its gender“less” style statement that provides an individualistic voice to its audience.

Diesel’s reboot of the entire brand is about elevating the quality and revamping the product, both within and beyond denim. It’s about bringing fresh air and modernity to the collections. The biggest change is in ladies’ apparel, an innovative mix of leather with a feminine touch. The brand is challenging its own knowledge to bring a full-blown collection that is appropriate for the advanced contemporary market.

Through 2004 the company’s communications strategy continues. A new advertising campaign has also been promoted. “There are 30 acid, dreamy, daily trips, the so-called day dreams,” explains Antonella Rossi, the marketing director. “They are the dreams of each one of the 30 protagonists who present the pieces of our Collection; but then, in the video, these dreams shift towards rather uneasy, ironic, atmospheres.” Irony, innovation, unpredictability, creativity, desecration: these are the strong elements of Diesel’s communication.

Then, in October Renzo Rosso sells two thirds of his Only The Brave Srl shares, the family holding which controls the Diesel group, to his oldest sons, Andrea and Stefano. “They asked me to teach them how to manage a company: I’m happy because I have always feared that one day they may prefer to stay out of the family business.”

In recent years, Diesel has reorganized its market strategy, positioning the brand in a premium segment, investing in research and quality, reorganizing the distribution structure, and reducing the world-wide points-of-sale from 10,000 to 5,000. Also excellent are the results for Dsquared, a brand acquired in 2001. The Martin Margiela brand has also grown consistently.

In 2005 the conquest of the Spanish market continues. After the opening of a first store in Barcelona in 2002, there are openings in Bilbao, Madrid, and Valencia, and a second one in Barcelona. Also, in  May a new store opens in Hong Kong.

In 2007 Diesel signed a partnership with L’Oréal’s luxury product division to launch the first  line of fragrances, which is called ‘Fuel for Life’. More collaborations were done the following year with Fiat and Adidas.

In 2010, the companies most controversial campaign “Be Stupid” won a Grand Prix in the Outdoor Lions category at Cannes but was banned in the U.K. by the Advertising Standards Authority.  Same year, a deal was signed with the Italian Ducati team of MotoGP. Diesel created its presence by creating race suits and clothing for the Ducati team.

In 2013 Nicola Formichetti was appointed as the new Artistic director of Diesel, and later in 2014, he unveiled his first fall/winter collection in Venice.  Meanwhile the OTB group, parent company of Diesel, bought 61% stake in Italian brand Marni, and in November 2015, OTB acquired the totality of Marni.

In April of 2017, Diesel has revealed its charitable collaboration with supermodel Naomi Campbell  in aid of her Fashion For Relief initiative, called Child At Heart. This project featured colourful love hearts and ladybird designs created by children attending the Diesel HQ kindergarten in Italy.

The company is currently in the mindset to reboot the brand with the mission to recapture the hip factor that made it great in the 1990s. Currently, OTB is the parent company of Diesel. Along with Maison Margiela, Marni, Paula Cademartori, Viktor & Rolf, and Brave Kid, specialized in childrenswear production and distribution. Also, Staff International, manufacturer and distributor of DSquared², Just Cavalli, Maison Margiela, Marni and Vivienne Westwood.