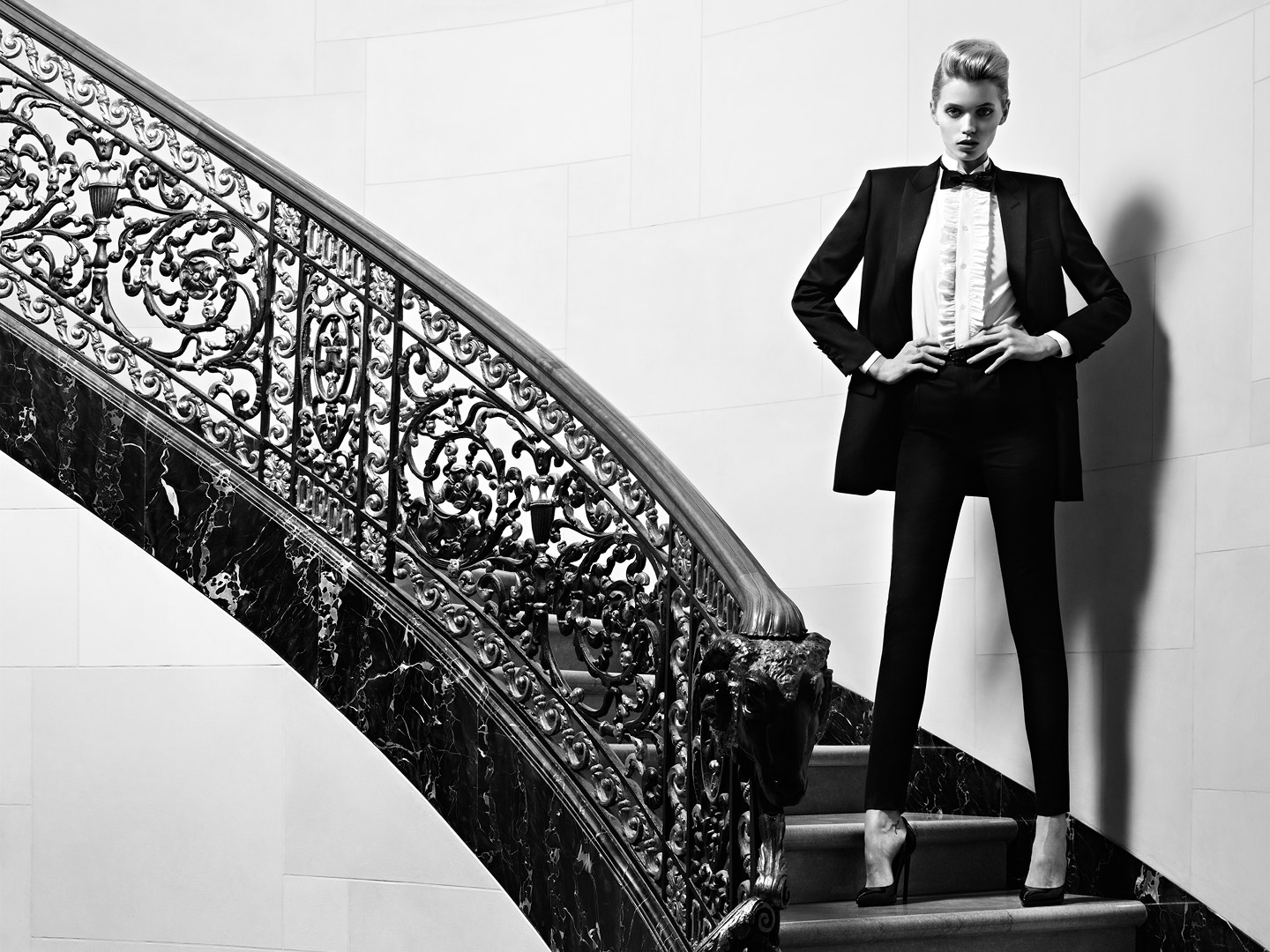 Yves Saint Laurent (1936) is a French designer born in Oran in Algeria. He entered the fashion world officially in 1957, when, as the 21-year-old assistant to Christian Dior, he was asked to take over when the master died of a heart attack in a hotel in Italy.

The Trapeze collection established the young designer as the child prodigy of French haute couture, despite only just having graduated from the École de la Chambre Syndicale de la Couture in Paris. He distinguished himself from his predecessor by the decisiveness of his sartorial cuts and by the soft but quintessential lines, which bore witness to his complete independence from the rest of the French fashion scene and his supreme individuality.

Saint Laurent On His Own

Yves Saint Laurent worked at Maison Dior until 1960 when was called up to do military service in Algeria. It is there that he learned, from his friend and future associate Pierre Bergé, the sad news that Christian Dior had replaced him with a new designer, Marc Bohan.

When he returned to Paris, he decided to set up on his own. With the help of Bergé and the financial backing of the American, J. Mack Robinson, he officially opened his studio in the Rue Spontini on 20 January 1962, and presented his first signed collection. His success was immediate. His designs were snapped up by France’s high society and by buyers from the American department stores, who appreciated the value of a line that was not overly elaborate but used well researched fabrics. Meanwhile, the fashion press acclaimed the impeccable cut of his suits, which became the only true rivals to Chanel’s style.

The next collections drew inspiration from history, art, and literature. It revealed the designer’s passion for the cultural world and, in particular, for the theater, for which he often designed costumes. In 1966, he introduced a women’s version of black tie for evening wear, a simple black outfit comprising a jacket with satin lapels and a skirt or pants, to be worn as an alternative to the traditional long dress.

The work of Matisse (1981), the paintings of Picasso (1979), Pop Art (1966) and even the writings of Marcel Proust, which prompted the taffeta dresses of Winter 1971-72 and offered him continuous sources of inspiration.

In 1965, minimalism and the geometrical works of Mondrian influenced one of his most successful collections, which is remembered for its rigorous lines, jersey dresses, and vinyl raincoats.

The collection of Winter 1976, dedicated to the Ballets Russes, won international acclaim and was said by the New York Times to be “revolutionary, destined to change the course of fashion.”

His exotic origins and the years of training spent in direct contact with the Arab world permeated his style. The strength and unusual combination of colors, the opulence of the fabrics, the richness of the embroidery, the inventiveness of his prints and some ethnically inspired garments. Such as the sahara jacket or djellaba, which were the hallmarks of his style, all the while combined with great formal rigour. Nor should not be forgotten Saint Laurent’s penchant, like that of Chanel before him, for putting tailored cuts and the main features of the male wardrobe into his womenswear collections.

In 1966 Saint Laurent and Bergé were among the first to introduce a marketing strategy into the world of haute couture that has now become common, which was to establish the ready-to-wear line (Yves Saint-Laurent Rive Gauche) to be sold in franchised boutiques. From the beginning it was never intended as a substitute for haute couture, but as a field of great creativity, releasing original and sought-after designs into the market.

Production was entrusted to C. Mendès, a company that manufactured other ready-to-wear brands, such as Patou, Grès, and Chanel. The decision to enlist a single supplier to tailor the clothes, working exclusively for the brand, turned out to be a sign of great foresight, a move well ahead of its time. The success of 1970 made Yves Saint-Laurent Rive Gauche the leading exporter of luxury ready-to-wear womenswear.

In December 1982, the business expanded to create a second line, Variation. Sales increased as a result of granting licenses, which functioned in such a way to ensure that the Saint-Laurent colors, design, and image were respected. The main store at Rue Spontini became too small and Saint Laurent moved to 5 Avenue Marceau.

Museums throughout the world, from the Metropolitan in New York (1983) to the Musée des Arts de la Mode in Paris (1986), to the Sezon Museum of Art in Tokyo (1990), to the Musée de la Mode in Marseilles (1994) have dedicated retrospective exhibitions to the designer, celebrating his creativity and hailing him as one of the greatest ever contributors to the history of fashion. The Group was quoted on the Stock Exchange in Paris in 1989. Today the estate is owned by Franµois Pinault as part of the holding group PPR.

In 1999 Yves Saint Laurent was bought by the Gucci Group. In 2000, the creative director, Tom Ford, rejuvenated the company, brought back its ‘sex appeal’, and implemented the best marketing. But Saint Laurent and Bergé were not convinced, and both had some disagreements with Tom Ford.

Later in January 22, 2002 on the runway at the Centre Pompidou, Saint Laurent made his final exit from the fashion scene with an outstanding retrospective fashion show of 300 designs from the past and present. The atmosphere in the room was feverishly high, especially at the end when Catherine Deneuve sang for her lifelong friend Ma plus belle histoire d’amour c’est vous [You are my greatest love story]. Saint Laurent read out a long and personal farewell letter:

“I believe I have never betrayed the boy who showed his sketches to Christian Dior with the greatest of trepidation… I have lived for this job, have always loved it and respected it to the very end. Fashion is not art, but needs an artist to exist. Clothes are certainly less important than music, architecture, or painting, but they are what I knew how to do and did, perhaps contributing to the transformations that have taken place during my lifetime. Today, we no longer strive only to make women look more beautiful but also to reassure them. Many people exorcise the ghosts of their ego through fashion, whereas I have always wanted to put myself at the service of women, serving their bodies, their movements, their very lives.” About his life, the designer said, “I have known those false friends, drugs and tranquilisers, and the prison of depression and clinics. I belong to what Marcel Proust called ‘the magnificent and pitiful family of neurotics’.”

In June 2002 Stefano Pilati, a probable successor to Tom Ford, took over the complete creative direction of accessories and luggage. Pilato provided a completely new stylistic point of view; the excessive sensuality of his predecessor gave way to a more classic, discreet, and bourgeois elegance.

Later, in December with 850 square meters of floor space, the new Yves Saint Laurent Rive Gauche store that opened in Milan became the famous French label’s largest in Europe. The space at number 27 Via Montenapoleone (formerly Gucci) replaced the existing shop at number 8 Via Verri, which was in turn replaced by an Alexander McQueen boutique.

In December 2002 Saint Laurent and his right-hand man Pierre Bergé gained public interest and recognition for their Foundation which occupies the building in Avenue Marceau. From this point on, the designer focused on the activities of the Foundation, which houses 5,000 dresses and 15 objects from the private collections of Saint Laurent and Bergé. The Foundation awards study bursaries and organizes fashion and contemporary art exhibitions.

Ford decides to leave the company in 2004 and Stefano Pilati, who has worked with Ford for YSL since 2000, becomes his successor, becoming the new creative director. At first Pilati receives negative reviews, but then, thanks his interpretation of masculinity and femininity, he got the support of the fashion system.

In 2012 Hedi Slimane becomes the new creative director, leading the newly-named, Saint Laurent, label to a huge success. Slimane was also in charge for the exhibition, “Yves Saint Laurent: The Retrospective”, at the Museum of Art Denver (March 25-July 8, 2012). The exhibition was memorable, including all historical products, leading Bergé to declare “Yves Saint Laurent would be very proud to be here.”.

Hedi Slimane contributed remarkably to the Fashion House and surprised everyone when he decided to leave in March 2016. In April 2016 Yves Saint Laurent choose Anthony Vacarello as their new creative director, known for his talent and creative mind.

In Marrakech, the 4,000-square-metre building was designed by Studio KO, and is located near the famous Jardin Majorelle. The building holds exhibition spaces, an auditorium, a boutique, and an open-terrace café. Also, a research library that holds more than 5,000 books related to fashion, literature, poetry, history, botanics and Berber culture.

In September and October 2016 the Yves Saint Laurent museums in Paris and Marrakech opened. The museums are a tribute to the loved designer, Saint Laurent, who died in 2008, always in the spotlight and his well known companion Pierre Bergé. Sadly, Pierre Bergé, the brand’s former chief executive and key collaborator, died on September 8th at age 86 and was not able to see the final product.

In comparison, the very different in style newly unveiled Parisian museum is located in the hôtel particulier  at 5 Avenue Marceau where Yves Saint Laurent spent nearly 30 years designing his collections from 1974 to 2002. A rotation of retrospective displays and temporary thematic exhibitions will be on display.