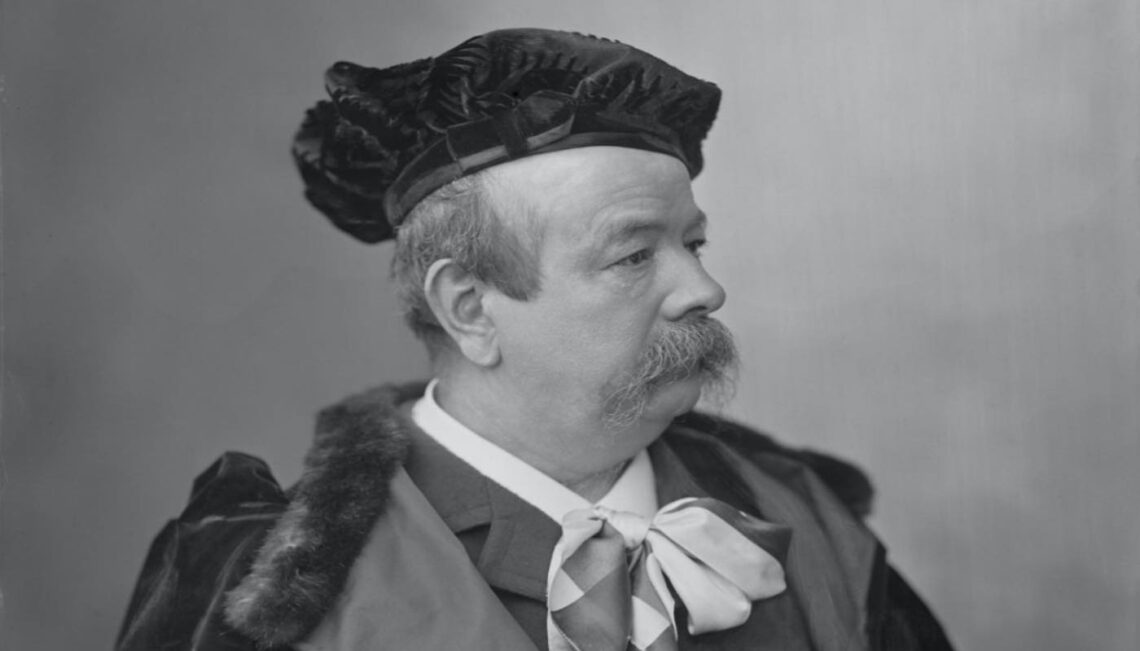 Charles Frédérick Worth was an important fashion designer of the 19th century, inventor of the concept of haute couture. He was a personality capable of overturning the centuries-old mechanism of fashion diffusion, imposing his own taste  on the most illustrious European aristocracies. Worth succeeded in imprinting his models with value and uniqueness through his own label.

THE LIFE OF CHARLES FRÉDÉRICK WORTH

Worth was born in Bourne, Lincolnshire, and he began working at the age of 12 as a salesman in London, first at Swan & Edgar and then at Lewis & Allemby. Young and ambitious, in 1845 he decided to move to Paris, the capital of international taste and fashion. Here, Worth began his career as a salesman in the famous Gagelin “magasin de nouveautés” in rue Richelieu.

After only five years, he managed to open a tailor’s department and became its manager. 1853 was the year of the wedding between Napoleon III and Eugenie de Montijo: the Gagelin house, which was the official supplier of the empress’s trousseau, made headlines. At the same time he took part in the Universal Exhibitions in London in 1851 and Paris in 1855. It was here that Worth had the opportunity to exhibit one of his original creations, a court cloak inspired by models from classical antiquity.

STARTS HIS OWN BUSINESS

Later, in 1857-58, he decided to leave Gagelin. Worth set up his own business with a Swedish partner, Otto Bobergh, at 7 rue de la Paix. An anonymous Parisian street that, thanks to his business, would become the capital’s most famous. The difficult beginnings, with a management of twenty workers and the collaboration of his wife Marie Vernet, a mannequin known to Gagelin, were soon crowned with success. Success was achieved through a dress for Princess Pauline de Metternich, wife of the Prussian ambassador to the French court.

Presented by the latter to Empress Eugenie, he became the official court tailor in 1859. Worth was specialised in evening gowns and ball gowns in worked tulle and lace. Moreover, he interpreted Montijo’s Spanish taste in his own way through boleros, lace and mantillas in bold colours.

After taking the cage-crinoline to its maximum expansion in 1859-60, with examples enriched by hundreds of ruffles, from 1865 he began to progressively reduce its width, realising in advance its saturation. In its place he first proposed the demi-crinoline and then the tournure (or pouff), which was definitively established in 1867-68, relegating drapery and padding to the back of the dress, flattening the front of the skirt. It was he who established a different rhythm in the succession of fashions. He introduced variations of shapes and novelties, and also invented new types of clothing such as the princess dress, first made for Empress Eugenie and Alexandra of Wales.

This style was a loose and comfortable dress, sewn without a cut at the waist, different from the usual women’s dresses of the time, made up of a skirt and corset detached from each other. Thus Worth introduced the concept of novelty into the almost unchanging wardrobes of the time. Using sumptuous fabrics and exclusive workmanship, he contributed after 1871 to the revival of the Lyon silk factories, prompting textile manufacturers to come up with ever-changing designs and types.

Once the partnership with Bobergh was dissolved, in 1874 his two sons Jean Philippe and Gaston joined the family business. The former assisted his father in the creative side and the latter in the administrative side, thus allowing the consolidation and expansion of the tailoring business. Supplying the courts of France, Austria, Sweden, Italy, Spain and Russia, after the advent of the Republic, the fashion house turned towards the new industrial bourgeoisie. Then towards the world of politics and show business, opening up to the worldly atmosphere of the Belle Époque.

WORTH: UNDISPUTED HOLDER OF TASTE

Worth, the undisputed holder of the taste and elegance, was the first to introduce innovative commercial and sartorial concepts. Moreover, he is credited with having divided fashion into seasons and with having thought of providing patterns for his creations on the international market. He also preferred to spread his ideas personally rather than give in to imitations.