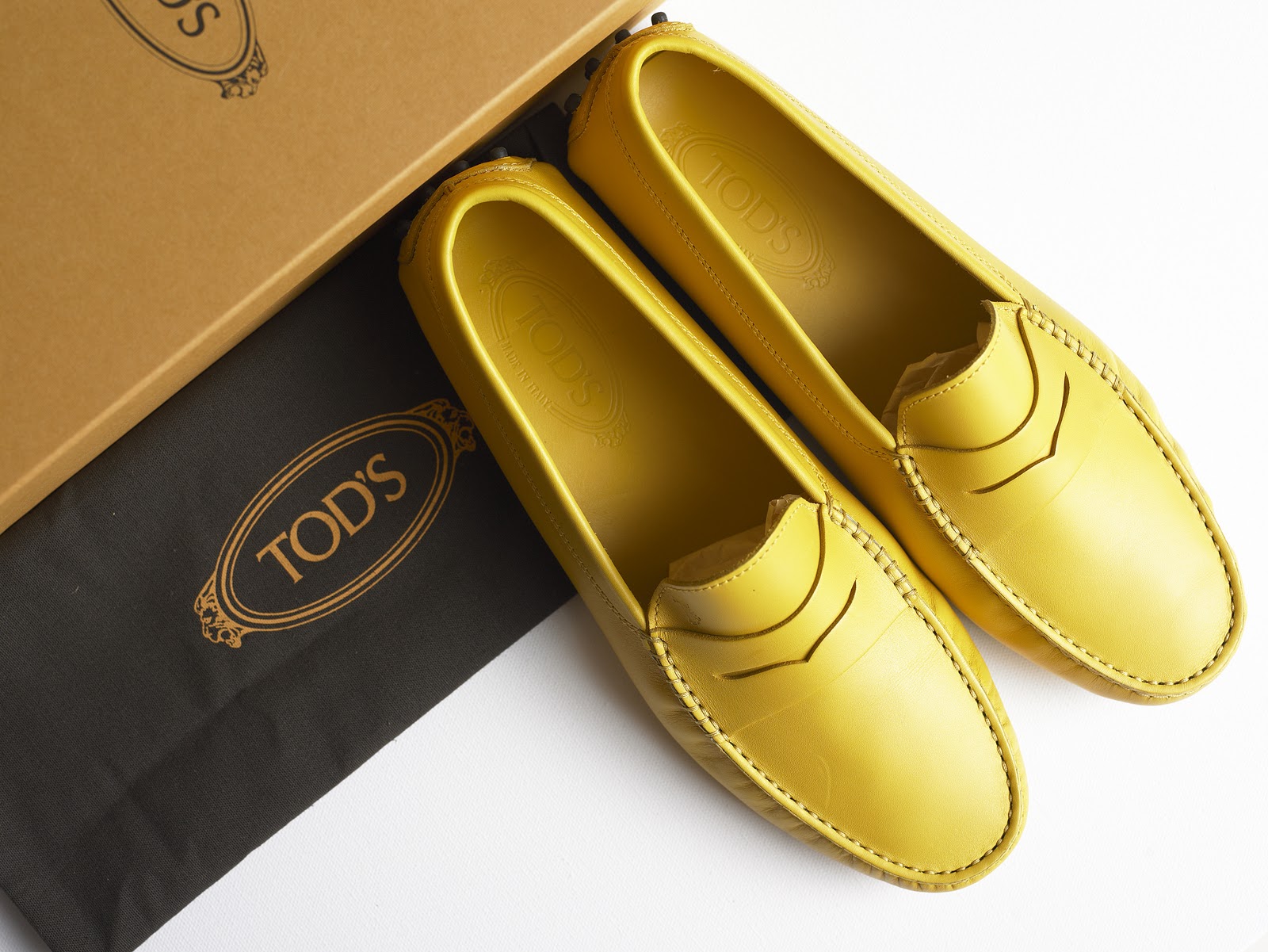 The origins of Tod’s dates back to the turn of the twentieth century, when Filippo Della Valle, Diego’s grandfather, founded a small shoe manufacturer.

“My family has always had leather as a ruling force,” recalls the current chairman, Diego Dalla Valle. “My grandfather Filippo was a shoemaker, who worked in his kitchen at home, at first helped by my grandmother and then by the six children as they grew up. Twice a week my dad (Dorino), who was in charge of production, and uncle Pasquale, in charge of marketing, would travel by night on bicycles, or in freight trains, to save money, to Pescara, Forlì and Bologna, to sell our products to wholesalers who serviced the market stalls.”

In 1920 Tod’s started from a leather an at home shoe making workshop, founded by Fillippo Della Valle in Sant’Elipidio, Marche, Central Italy. Later, in the 1940s, Dorino Della Valle, took over the company after Fillippo’s death, and slowly started to grow this small shoe-making factory. He took on greater responsibilities within the structure of the footwear manufacturer that was producing, at the time, only women’s shoes.

“my mother, Maria Micucci would stitch together soles and uppers, letting me sleep in the baskets of shoes to keep an eye on me.”

Dorino expanded the company into the US successfully, and started to sell his shoes in major department store in US. Diego began working for the company in the 1970s, after an attempt at university studies. He took just four exams in two years, in the department of law.

“In effect, the lack of a desire to study has always been a family disease. So I went back home and started working with my father.”

Through the 1970s Diego Della Valle expanded Fillippo’s workshop into a wider impact to the whole industry. Then, in 1979, Diego Della Valle became President of Tod’s. Also at this time, the vice president was his brother, Andrea Della Valle.

In 1986 Diego Della Valle became the sole administrator of the company, which in the meanwhile had been renamed Tod’s S.p.A. New concepts in terms of product lines, marketing plans, and corporate strategy transformed the family workshop into one of the leading players in the production and marketing of luxury footwear and leather goods.

Later, the brands Hogan and Fay were introduced into the Tod’s Group in the 1980s.

Hogan stood out for its high design content. The basic model, inspired by English cricket shoes from the 1930s, was made with a double overlapping upper in order to make the shoe more durable. With a foam rubber padding of the edges and the insole, and a sole with an undulating design to ensure maximum flexibility. Initially focused on the production of footwear for women, men, and children, Hogan recently diversified into leather goods.

Founded by the Tod’s Group in the late 1970s, the Fay brand was originally born in the United States, specializing in the production of robust corduroy cotton and nylon fishnet jackets jackets closed by four hooks inspired by American fire-fighters. Today the brand features male and female lines, complete with accessories, and a kids line. Fay is characterized by the distinctive Double Life philosophy. In each Fay collection, the garments are designed to address different business and business opportunities. Also, Leisure is for the city or the most dynamic outdoor contexts. The “Fay Code” is today synonymous with informal, sophisticated, cosmopolitan and versatile elegance. The expression of an Italian taste that, inspired by an international breath, combines quality, luxury and research in a timeless balance between tapestry and innovation.

In the 90s Fay joined the eloquent quality of Made in Italy and the style of tradition. The brand evolved into a cosmopolitan taste that moves its footsteps from tailoring to anticipate new urban scale trends worldwide, listening attentively to a constantly moving audience.

Excellence in quality is an absolute must for the entire group. This is guaranteed by the high proportion of craftsmanship in the manufacturing process and a strict control of the raw materials and all the phases of the production process. Tod’s shoe manufacturing requires more than 100 working phases, from handmade leather to sewing of individual components of each model. A shoe can be made up of 35 pieces of leather, each of which is treated and manually checked before being assembled.

The entire process involves several skilled craftsmen in carrying out a precise task. The skins come from the best tanners in the world and, like fine wine, some pieces have to wait years to reach the right color and consistency point. Every single piece is checked by the experts to evaluate their color, strength and thickness to achieve a perfect homogeneity, otherwise it is discarded. Once the finished product is reached, every pair of shoes is carefully examined and the defective models are eliminated.

The same procedure is followed in the realization of the bags, which stand out for a craftsmanship similar to the old procedures used for saddlery.

Production is primarily carried out in 9 fully owned plants, 7 for footwear, and 2 for leather goods. Also, a part is outsourced to a few specialized workshops, which the company has established stable and long-lasting working relationships. Diego Della Valle has always rejected espansionist policies by acquiring some luxury players.

“I do not see the advantages of a pole. Each brand has its own research and product offices, advertising campaigns are autonomous, as well as mono-brand stores. In short, synergies are limited to production and logistics. With the risk that buyers do not have organizational structures and managers to devote to what they have bought, they eventually do not control anything anymore.”

The “gommino” was born in the late 1970s. Diego Della Valle had noticed that they needed footwear ideal for casual chic occasions where a classical Italian prefer to wear a pair of chinos and a blazer and began working on this 50s prototype. The loafer if lightweight, flat, entirely hand-sewn, with rubber balls on the sole, so it simply called “rubbery” and worked. This featured an unusual sole that had 133 little raised rubber circles. In order to make one pair of loafers required 100 manufacturing steps, many of which involved hand labor. The strong point of the Tod’s line was also the selection of fine American leathers and British hides, all rigorously water-repellent and produced by quality, small-scale tanneries.was created with the intention of combining classic Italian style with the functionality of a versatile shoe that can be worn on any occasion.

In 1997 the company launched a collection of classic, modern and chic handbags, able to reflect the same spirit of the footwear line. The most famous was the D Bag, bought by Princess Diana in the Paris boutique, demonstrating the company’s elegant style.

Turnover and Investments in the Early 2000s

By 2000, Tod’s debuted in the electronic market of the Milan Stock Exchange. In 2001, the rise in economic indicators was still in double figures. Turnover increased by 26.6%, while the EBITDA, registered a leap upward of 31.5%.

In 2002, a year of crisis for the luxury sector, the manufacturer had a repeat year. Net revenues amounted to €358.2 million, a 12.5% increase, the EBITDA was €91.8 million, a 13.9% increase. That same year, investments in non-physical immobilization of capital, amounted to €28.6 million, due to the expansion of the network of direct distribution and sales, which grew by another 21 new shops. The capital locked up in material investments amounted to €15.8 million, of which 38% was allocated for the construction of a new manufacturing plant adjoining the headquarters of Sant’Elpidio a Mare. All the investments were self-financed, given that the financial situation was in the black to the tune of €46.7 million.

The label Tod’s, accounted for 57.2% of total sales, continues to bring in the lion’s share. During the same period, the company acquired 4.6% of Italy’s Banca Nazionale del Lavoro, so that Della Valle is now the third-largest shareholder, after the Basque group BBVA and Le Generali. Tod’s CEO, Diego exclaims,

“The objectives of this investment is to help, along with the other primary partners, to reinforce the stability of the bank. I am an industrialist, not a financier. I decided to buy into BNL on the basis of an industrial project, and I am in for the long term.”

At the end of 2002, the distribution network included 71 directly operated sales outlets, and 37 franchised stores.

In 2003 revenues and the gross operating margin of the first quarter of Tod’s SpA have increased, at constant rates of exchange, compared with the same period in 2002, by 3% and 17%, respectively. The label Tod’s, accounted for 57.2% of the total sales.

In 2006, the comoany entered a collaboration with Marcolin Group to produce sunglasses collection. This year, they started to develop their market in China, and opened the first flagship store in Hong Kong. Until 2009, Tod’s has opened 13 boutiques in China.

Later, in 2011 Tod’s funded the renovation of the Colosseum.

That same year, the company began supporting the Teatro alla Scala in Milan, entering the Theater Foundation. The result of this valuable collaboration is the short “An Italian Dream”.

A year later, in 2012, the leather goods, and accessories of Tod’s became available on Mr. Porter.

2013 the company replaced creative director, Derek Lam, with Alessandra Facchinetti, who made an impressive debut in the 2014 spring summer collection, until her stepping down in 2016. Then, in 2014. Andrea Incontri appointed creative director of men’s wear of Tod’s. Dot’s of Life launched- a modern platform that encouraged people to share their lifestyle on social media through the brand, utilizing a key modern platform.

In 2015 Tod’s partnered with Net-a-Porter.com, after their trial launch a year before, to sell their ‘ready-to-wear’ brand of accessories online. At this year, Tod’s SpA acquired Roger Vivier, a French luxury women’s shoe brand. A year later, in 2016 the brand revenue registered €419.4 million in sales in the first nine months of 2016.

Currently, the company’s headquarters still remains at Sant’Elipidio Marche, Central Italy, where Fillippo first started his small home-based workshop nearly 100 years ago. The rapid development of recent years has allowed the Tod’s Group to reach €1.004 million in turnover at December 31, 2016 and reach a number of employees that exceed about 5,000 employees.

Throughout Tod’s 90 years alive, they’ve been seeking perfection. Their legacy is intertwined with innovative thoughts and represented in an unprecedented approach. Tod’s everlasting mission is to understand and to pave the way to greatness, asserting the notion that with each step, perfection is possible.