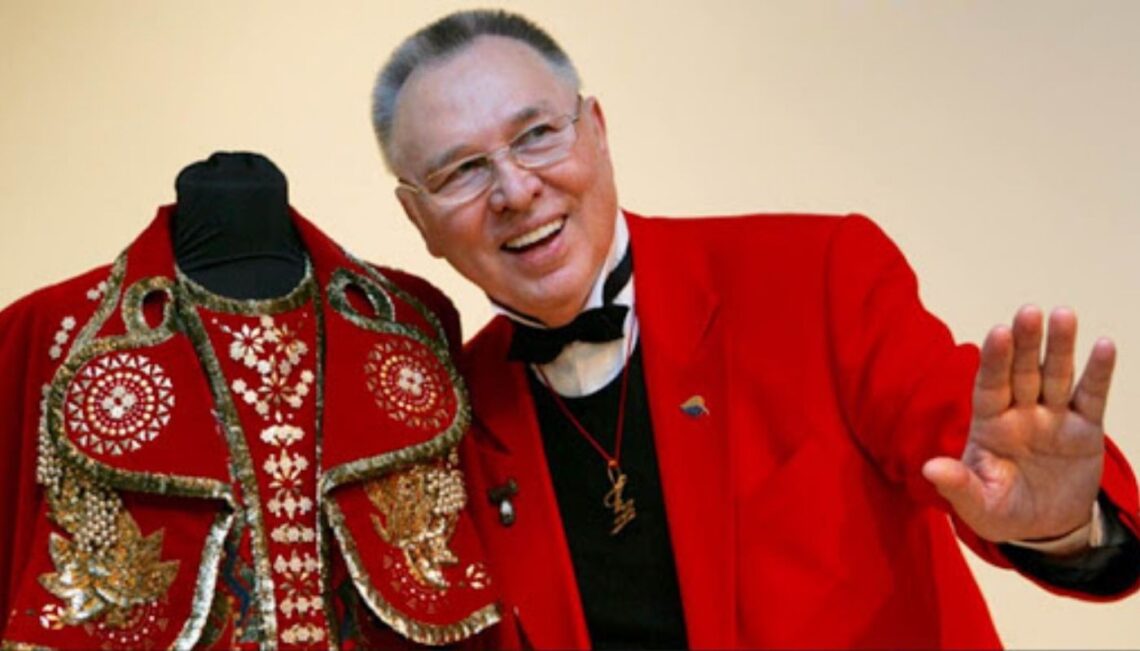 Viacheslav Zaitsev, better known as Slava Zaitsev, is a Russian fashion and costume designer born in 1938. He grew up in Ivanovo, an industrial city known for its textile production. Having been unable to study what he wanted, he joined the Applied Arts Faculty of the Chemistry and Technology School in his hometown in 1952.

Then, he joined to the prestigious Moscow Textile Institute in 1956. Graduated with top marks and after a long experience with the Soviet Fashion House, he opened his own atelier in 1978. After a few years the fashion designer earned the title as the “perestroika” designer for dressing Raisa Gorbachev.

During the ’60s and ’70s, he was known in the French press as the Soviet Union’s answer to Christian Dior, or rather, “Red Dior.” In an article called “Postcards From the USSR” in its October 1988 issue, Vogue called Zaitsev “the czar of Soviet fashion.”

SLAVA ZAITSEV AND THE YEARS IN PARIS

He left Russia in 1988 to make his debut in Paris. Slava made it his starting point as a fan and admirer of Italian fashion. Using rougher materials, such as cotton, wool, and felt, he re-created an Italian-inspired look, particularly in suits and shoes. Slava Zaitsev was awarded honorary citizenship of the city of Paris for his unique contribution to the world of fashion after winning numerous international category awards. In the 1990s, the designer was tasked with creating the robes of the Russian Constitutional Court justices as well as the uniforms of the Moscow police.

SUCCESS AT HOME AND AROUND THE WORLD

Slava Zaitsev is not just a fashion business, but also one of Russia’s major model agencies along with Prestige, Modus Vivendi, and Abc. Zaitsev’s perfumes, which kept the company afloat during the tumultuous years of the Soviet Union’s demise, are excellent echoes of Russian tradition. Maroussia, a women’s perfume in a crimson bottle designed like the silhouette of St Basil’s Cathedral, is a tribute to the designer’s mother, Maria, and the homeland. Slava Zaitsev is joined in running the fashion firm by his son Yegor, who is also a designer. In 2001 Zaitsev showed his collection entitled Dedication, with some of his most expensive dresses: prices ranged from around $2,000 to $10,000 to $12,000 per garment. In 2003, for Putin’s visit to England, he designed the dress for first lady Lyudmila Putin.

According to the New York Times, he is one of the few Soviet icons who has maintained his influence in modern Russia. Slava Zaitsev opened four men’s apparel stores across Russia in February 2005, expressing his lack of interest in obtaining international renown and instead wishing to stay loyal to Russia and urge Russian designers to avoid being influenced by the Western world.