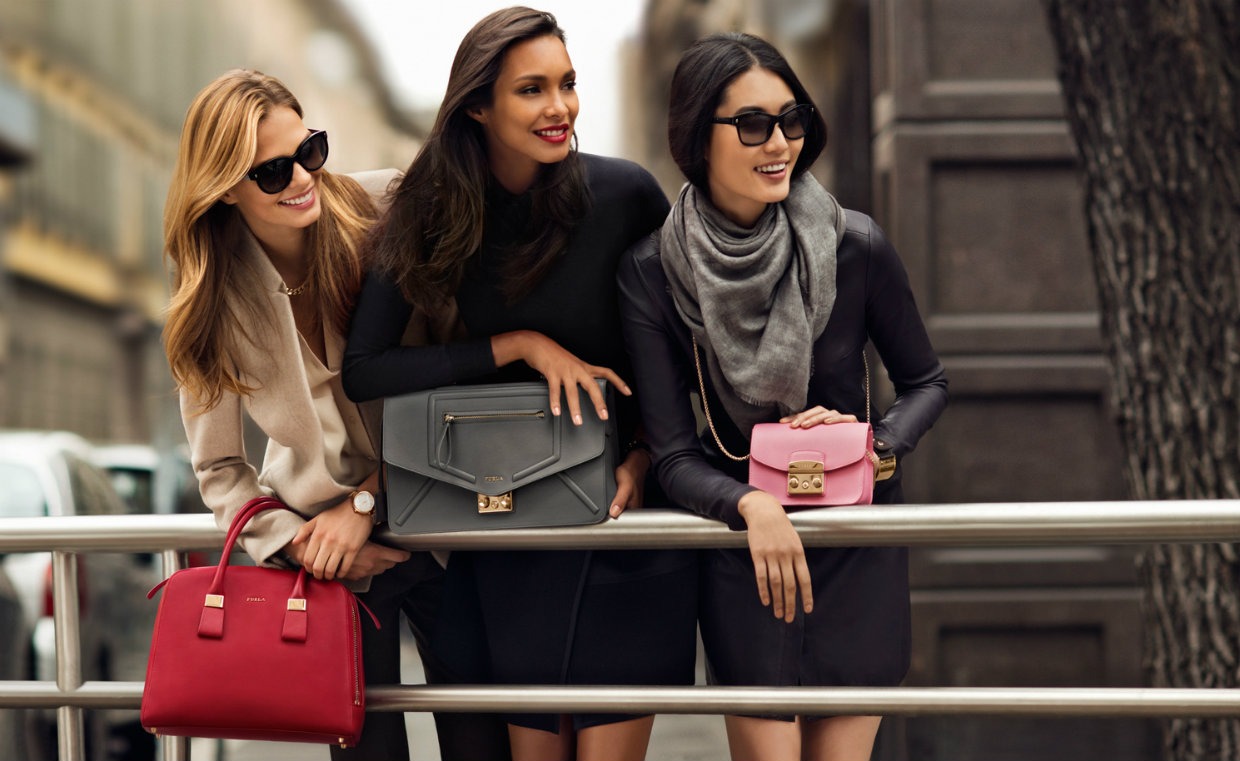 Furla is an Italian leather company that was established in Bologna in a historic 18th century villa in the 1927 by  Aldo and Margherita Fulanetto. At first, the company distributed clothing and accessories, then over the years began to manufacture bags, shoes, and leather accessories.

In 1955 Aldo opened the first Furla store on Via Ugo Bassi in the heart of Bologna and the brand began to grow. By the 70s the second generation, siblings Carlo, Paolo and Giovanna Furlanetto, took position. Paolo and Carlo took responsibility of the growth of the company, while Giovanna decides the creative direction. At this time the company launched the first handbag and accessories collection with the furla logo. The company took a shift towards the design and production of exclusive leather items. By the 80s the brand has stores in Bologna, Rome, Paris and New York.

The Furla collections are Made in Italy and embody the Italian craftsmanship, but with a modern twist. They use prized leathers, and have created a special tanning process with an emphasis on detail, supported by the latest technology. The products embody Italian lifestyle and bring that to all parts of the world.

Accessible luxury has always been the brand’s focus strategy, especially for emerging markets. By adopting contemporary and functional to its design philosophy, creating a glamorous and joyful lifestyle, Furla has engaged with its customers successfully. Brand’s global best seller Metropolis handbag, a clean and liner design, produced from fine materials and pure italian craftsmanship but only cost around €250, it has made luxury affordable.

Success in Italian and Abroad Markets

By 1998 the company reached sales of about €40 million, and had distribution all over the world, with 56 single-brand boutiques in Italy and 24 abroad. In February 2000 the opening of the French market increased sales by 35% compared to 1999. Also during this year, the company founded the “Premio Furla Per L’Arte”, with the purpose to provide visibility to Italian emerging artists.

In February 2002 the company enters the teen, which marked the birth of Furlina, a teenage comic strip character who appears on bags, accessories, and watches. A year later the company sees growth in the domestic market, which was the goal of Giovannna Furlanetto. The corporate strategy for achieving it includes a program that will open two boutiques in Sardinia, in Fort Village and Cagliari, and two in Sicily, in Syracuse and Taormina. Then, in 2007, Eraldo Poletto was appointed the first non-family member chief executive officer.

In 2008 Fondazione Furla is created and supports the Premio Furla per l’Arte award aimed at emerging Italian artists on the contemporary scene. Another important project supported by Giovanna Furlanetto is the Furla Talent Hub, in cooperation with Alta Roma, a reservoir of young and talented designers who have the chance to compete for the creation of a line of shoes for the label.

In the same year, the company launched the male collection, its first shoe line, designed by Max Kibardin, and starts exploring announced that the company signed an agreement with Tamburi Investment Partners, and ready to go public in 2017, become one of few Italian companies to be listed.

Starting from 2014, Furla made significant marketing push, by collaborating with established fashion photographer Mario Testino and his agency. Furla built a 360 degree communication project to reset the tone of voice and brand image. A huge investment was made to support ad campaign to be seen on all kinds of media, including outdoor billboards, press, videos, social media, in store and PR purposes.

Furla opened 111 new shops worldwide in last two years, and 60% of Furla retail network is fully owned by the company.  The year 2014 closed with a consolidated turnover of €262 million, and achieved 15% increase compared to 2013.

In 2015 Furla continued to expand its distribution network, in the first half of the year, the company opened 39 new stores, as a result, sales were increased 30% to €151.2 million in the first half of 2015. Japan remains Furla’s most important market. Meanwhile, Furla reached its goal and opened one brand new flagship store in New York.

Also at this time, the company appointed former C.Wonder retail executive Scott Links as its new CEO of the US department. With the aiming to becoming a lifestyle brand, now Furla has added new product categories such as women’s shoes, men’s leather goods, accessories, sunglasses, jewelry and watches.

In 2017 Furla celebrated its 90th anniversary by launching a limited collection of its best seller Metropolis handbag during Milan Fashion Week. This limited collection are based on five different colors and nine changeable flaps to narrated a story of music style across 90 years, and each bag represented one iconic music style in every decade. The limited collection was revealed e-commerce. Selling online strengthened the brand, leading to the opening of new concept stores in Milan and abroad and an increase of sales of 45% in three years (2010-2013).

By 2018 Furla’s network reaches over 1600 points of sales globally, of which 1200 are multi-brand and department stores, and the rest 444 mono-brand store are operating across 100 countries, located in most prestigious shopping area. In addition, brand’s expanded distribution strategy is set to continue throughout 2017.