In 1953, Renzo Rossetti, along with his brother Renato, opened their first shoe factory in Parabiago, which later developed into their brand known as Fratelli Rossetti. Then, the company was officially established in 1955 by the Rossetti brothers, who were born in Sanguinetto, near Verona. The brothers first created sport shoes then moved on to formal shoes.

Renzo began working at the age of 13, and was a typographer, mechanical draftsman, and artisanal producer of shoes for cyclists. Success came through the artisanal perfection. Renzo exclaims,

“We have always worked as if we had to personally answer to the customer for every pair of shoes we sell him.”

This includes innovation applied to a classic style. In the book I Mass-Moda. Fatti e Personaggi dell’Italian Look (Spinelli Publishers, 1979), Adriana Mulassano says “Men, poor things, as to shoes, were really in a bad way.” The market wouldn’t offer anything other than laced shoes with fringes and ‘derbies’, in black or brown calfskin. There were no new seasonal styles and no imagination. And so they started: the banning of laces, the promotion of loafers, the launch of the first very soft unlined shoes to be worn in summer without socks, the marketing of boots, higher heels, and the introduction of colors through an ageing process that would make them more acceptable.

In 1961, their signature moccasin, Brera, was created. Success was such that in 1966 Fratelli Rossetti was forced to expand and build a very modern production plant.

In the 70’S, Fratelli Rossetti, collaborated with the much celebrated Italian designers like Valentino, Armani, and Pierre Cardin, combining creativity and production results.

The first women’s line was created in 1973. Single-brand boutiques followed one after another in Genoa, Venice, Milan (at via Matteotti-via Montenapoleone), Bari, Rome, Paris, and Chicago. Diego, Renzo’s son, joined the family business in 1978. Under his direction, Fratelli Rossetti was the first Italian fashion label to open a boutique on Madison Avenue in New York. Today he is company Chairman.

Dario began working in the style department in 1981, he attended an artistic university with courses for shoemaking. He is an art lover who collects antiques and is passionate about vintage cars and searching for inspiration for new creations to add to the collections. In the Nineties, Luca graduated from Milan’s Bocconi University, and was already involved in the management side of the business. At this time, all three brothers were involved in the business.

They recently created the Flexa shoe, a 18 piece hand-assembled which adjust to the foot’s movement thanks to unusual flexibility and a removable foot-strap.

The historic shoe factory in Parabiago, near Milan manufactures more than 400,000 pairs of shoes a year, with a turnover that in the late 1990s was about 70 billion liras. Some 50% of the production is sold in Italy and the rest is exported. Each year about 10% goes to the U.S., where the company has been active for more than twenty years and where, in June 1999, it opened a large showroom on Madison Avenue in New York.

In May 2002 the Flexa Sailing model is created at the explicit request of Mascalzone Latino (Latin Scoundrel), the Italian boat competing in the America’s Cup. It has all the characteristics requested by the team members. The first prototypes are tested by the crew during training at Elba and in Auckland. The model goes on sale in July 2002 in two versions: the Flexa Sailing Professional, with the same technical standards as the shoe worn by the crew in the America’s Cup, and Flexa Sailing, less high-tech, for fans of sailing in general. The shoe is available in red and blue, the colors of Mascalzone Latino, and in a sand color.

In November, shoes, ankle boots, and desert boots are created in the brightest colors: red, green, and yellow; flats and heels are created for singing and dancing. In the same style as the costumes by Elisa Savi, these shoes have been designed by the Rossetti brothers for the American musical Fiddler on the Roof, which received three Oscars in its film version and had more than 3,000 performances on Broadway in New York, in London, and in Japan.

By 2003 the company employs 260 workers, and is one of the most important in the field regarding turnover, number of employees, and international image. The entire ownership is still in the hands of the Rossetti family. The president of the group is Renzo Rossetti, who sets long-term strategy. His three sons have other operating functions: Diego, 46, in the company for more than twenty years, is the marketing and commercial director and coordinates all the communication activities in Italy and abroad; Dario, 44, in the company for more than ten years, follows coordination, planning, modeling, and purchases; Luca, 37, a graduate of the Bocconi University in Milan, is the general manager.

In February 2003 Fratelli Rossetti opens its first outlet space in Foxtown, a large multi-brand store in Mendrisio, Switzerland. The strategy chosen by Fratelli Rossetti at the beginning has not changed over the years and can be summed up in a concept that is still extremely effective even today: maximum harmony between technology and tradition, maximum equilibrium between quality and price. At this time in Italy, there are 13 boutiques. Abroad, the company’s main locations are in New York, Paris, London, Brussels, and Hong Kong.

Renzo Rossetti opens his own museum with a rich collection of ethnic shoes accumulated over a period of 50 years in Parabiago. He began the collection at an early age, before World War II, and very much desired to see it have its own space. The museum can be visited by appointment. It has 3,000 pairs of shoes that are perfectly maintained.

In 2005 after the opening of a third boutique in Paris, on Rue de Grenelle, comes the début of a new franchise store in Dubai. The company has a turnover of €55 million in 2004.

In 2004 and 2008, they opened a franchise store in Dubai. As China started being the new luxury market, 2010 saw the brand opening its stores in China.

In 2008 Fratelli Rossetti, by now a golobal brand, reinforced its international strategy by investing in the Asian market with the opening of a store in Hong Kong, followed by the opening of sales locaitons in Beijing, Hangzhou, and Shenzhen. In 2010 the group closed out the year with 14% growth in revenue with respect to 2009 (72 million in sales). In 2011 it grew another 10% with respect to the previous year.

In 2011, Fratelli Rossetti collaborated with the Californian Designer George Esquivel, combining the quality of the brand with the innovative colour matches, for their Spring/Summer collection. The same year itself, a virtual store was launched for online sales. In 2012,  the brand teamed up with NBC Sports for Super Bowl, providing commentators covering the football event with footwear. 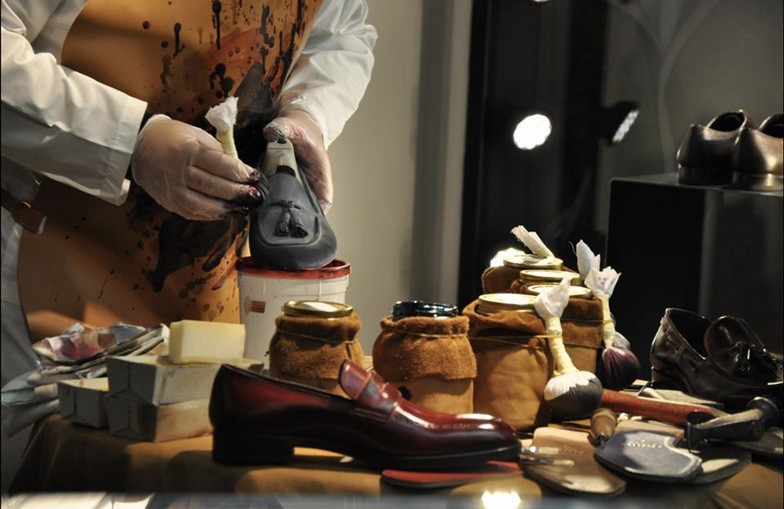 Fratelli Rossetti “Made to Measure”

In the same year itself, they launched ‘made to measure’ service. Fratelli Rossetti launched a limited  edition collection for the online platform shoescribe. The ‘Toledo Experience’ was a live show to the audience showcasing the famous hand-colouring technique, happened at the Montenapoleone in Milan in 2013. To strengthen the brand’s presence in Far East, a 100 square meter store in Taiwan was opened, in the Mall of Taipei in the same year.

In 2015, the brand proposed ‘A tribute to Brera’ their iconic moccasin. The same year  the brand introduced Dandy, the derby in mirror versions. Also, #sexyinflats was a project done, dedicated to women who can feel sexy even without their heels on.  The year was closed with a turnover of €72 million year, which was 4% higher than the previous year, showing the brand has the correct direction for growth.

Fratelli Rossetti, has an aim for 2018, which is to expand itself by opening 11 stores in China. With a wide presence, the brand has expanded while retaining its values and at the same time catering to the changing demands of the fashion and the consumer.