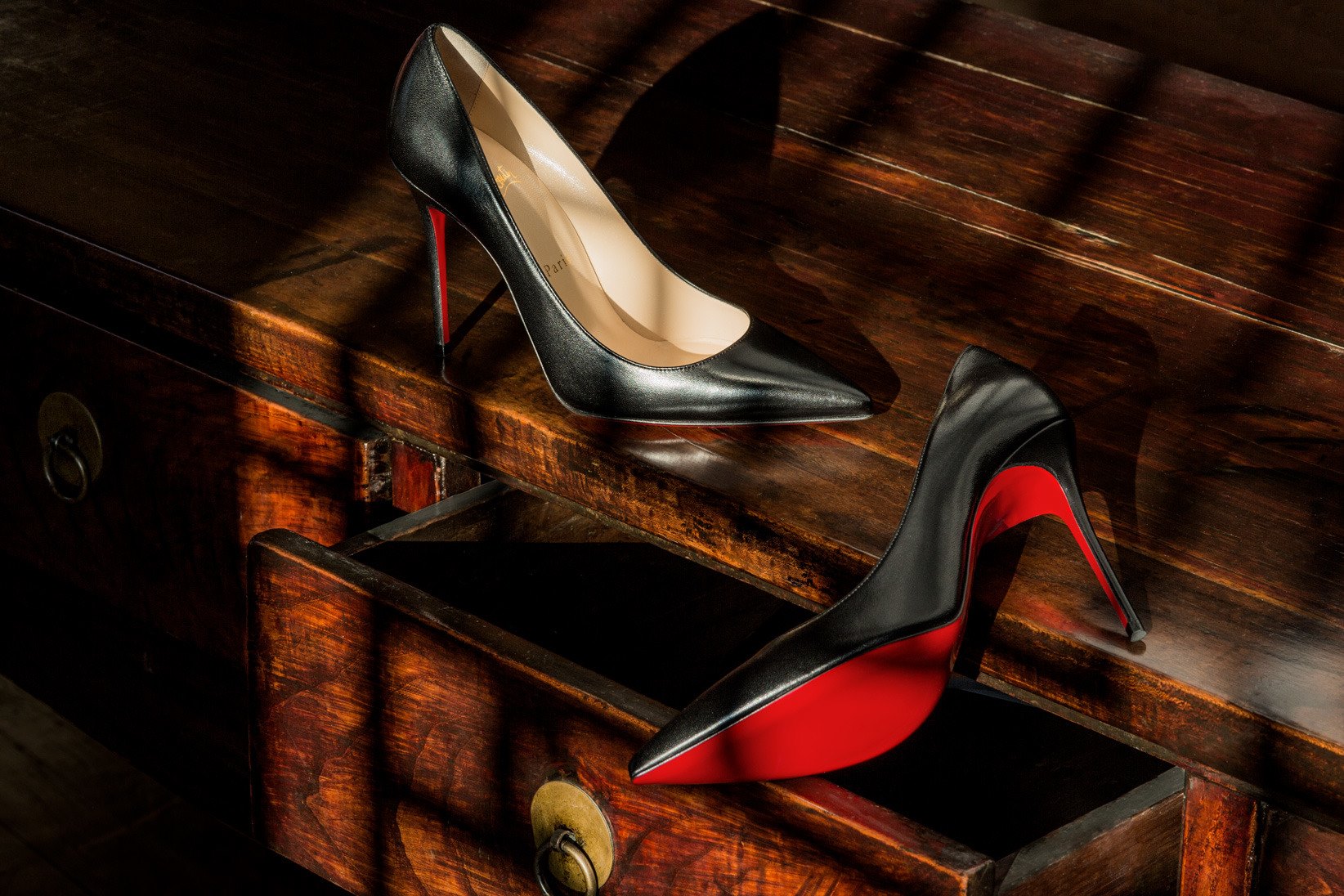 Christian Louboutin, French shoe designer, was born in Paris 1964. His iconic element is the high-end stiletto, with the red sole. At the age of 12 his true fascination with shoes began when he visited the Musée National des Arts d’Afrique et d’Océanie, where he saw a sign forbidding women wearing sharp stilettos from entering a building, for fear of damage to the wood flooring. This image inspired his work.

Christian expresses, “I wanted to create something that broke rules and made women feel confident and empowered.”

He studied drawing and decorative arts at the Académie d’Art Roederer. In his teens he left for Egypt, and spent a year in India. After this he came back to Paris in 1981. He created a portfolio full of his extravagant high heel drawings and sent it to the top fashion houses. This was a success, and he was hired by Charles Jourdan, one of the most respected shoemakers in Paris. Through his work with Jourdan, he met Roger Vivier, who claimed to have invented the stiletto, and they started a long and meaningful collaboration. Also, he freelanced for Chanel and Yves Saint Laurent.

In the late 80’s he left fashion, became a landscape gardener, and contributed to Vogue Paris. This only lasted a few years before he started to miss working with shoes, and decided to launch his company in 1991. His first collection was presented in 1991, then in 1992 he opened a boutique on Rue Rousseau in Paris. Princess Caroline of Monaco was his first customer. She complemented the store when a journalist was present and he published her comments, which helped Louboutin gain recognition. After this, clients such as Diane Von Furstenberg, Madonna, Nicole Kidman, Cher, and Carolyn Bessette-Kennedy soon followed.

Louboutin’s signature is the red sole, first created in 1993. He claimed he was trying to liven up the design of his shoes, when he “spontaneously grabbed his assistants red nail polish and started painting the sole red.” He exclaimed, “I instantly knew that it would be a success.” Through the 90’s and 2000’s Louboutin brought back the popularity of the stiletto, and in 1998 he received the Fashion Footwear Association of New York Award for the best shoe designer of the year.

Since the brand’s launch, Christian Louboutin’s creations have been immortalized in museums, on fashion week runways, red carpets, and in pop culture around the world. A woman’s natural beauty has always been at the center of the designer’s inspiration. 2014 welcomed the launch of Christian Louboutin Beauté with its first nail polish, Rouge Louboutin, accompanied by a full range of Noirs, Nudes and Pop colors. The brand’s highly anticipated ‘second chapter’ of beauty, lipstick, launched in September 2015, followed by three signature Christian Louboutin fragrances in September 2016 and a striking collection of eye amplifiers, Les Yeux Noirs, in March 2017.

With a prolific collection of women’s and men’s shoes, day and evening handbags, and small leather goods Christian Louboutin now counts more than one hundred boutiques around the world. Also, there are several locations dedicated to men’s and a one-of-a-kind beauty boutique located in the heart of Paris’ 1st arrondisment, just two doors away from 19 Jean-Jacques Rousseau.