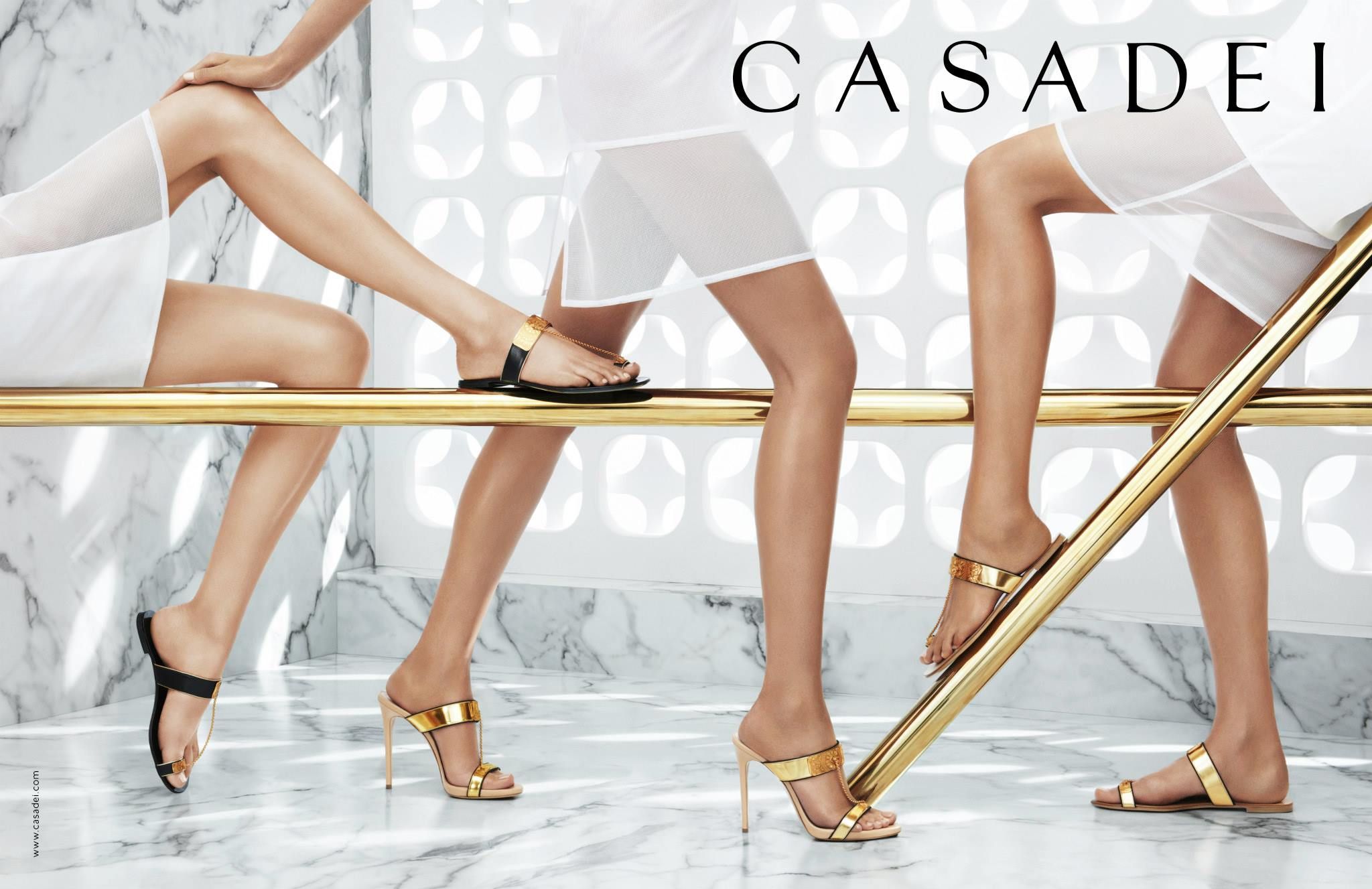 The Origin: Quinto and Flora Casadei

Casadei is an Italian shoe factory that was established in S. Mauro Pascoli, Forlì Italy at the end of the 1950s as an artisanal workshop with particularly skilled production. The brand journey as the global footwear leader is anything but ordinary. If you see their success trajectory from an aerial overview, you’ll find that their growth arc is streaked with design excellence and entrepreneurial gut.

The label’s quest for age defying and bold designs began in the year 1958. Quinto and Flora Casadei are the protagonists of Casadei’s spirited tale of two cordwainers who made footwear for the inbound tourists in the eastern Italian coastline. Together, they built the legacy of their humble shoe label in a workshop of two. Tucked away in San Mauro Pascoli in Forli, the provincial town of Romagna Rivera, the Casadei pair brought in the beginning of a new art form of shoe-making, in a region primarily known for agriculture and renaissance frescos.

The 1960s saw the development of a more formal business structure, the beginning of exports to Europe, the U.S. and the Far East, and the start of a full-fledged line dedicated to evening wear and a Collection of bags. By the late sixties, the whispers of Casadei’s detailed luxury spread beyond the Italian frontiers. After dressing feet of strangers on vacation with their exotic offerings, the family-run business expanded in terms of production scale and international presence. The company gained structure and channelled its focus on catering exports to larger sections of European market as well as the United States of America.

They elevated a level above from their initial line of sandals and launched the first series of platform shoes, a popular and trendy choice in the eccentric decade of the ‘60s. Early seventies allowed the two shoemakers to shift their base from the homely workshop to an industrial facility. This change triggered the journey of a new kind of shoe-speech.

Taking the platforms as their prototype, they experimented with the idea of lace-up and slip-on generation of platforms. Further, they added a dose of bravery in design by creating a line of platforms covered with fabrics sporting delicate embroidery. Later, they switched gears to introduce an era of leather pumps balanced on low flared heels.

By the end of the seventies, their instinctual understanding of versatility and utility kicked in with the earliest version of Casadei boots that can be zipped down from thigh-high, to knee-high and finally to short booties. With a new prototype in market to be tried on, they also expanded their presence in Asian market. By 1977 they were now open for business in the Japanese market.

In the early eighties, the label expanded its operation to the Middle East. After the roaring feat in the feet fantasy expedition with their boots and platform shoes, Casadei turned to the category of pumps. Their rendition of pumps saw an imaginative exploration with polka dots and velour tulle, finished with high conical leather heels dipped in golden hue.

In a matter of no time, the pumps secured a spot in their hall of fame, and till date is considered an iconic product by the label. Designed to adapt the graceful curves of the feminine feet, the label continues to dabble with different fabrics, finishes and embroideries to create newer identities with passage of time. Towards the end of the eighties, the label was quick to adapt to the sportswear trend by building a dictionary of hybrid sneakers and football boots with heels.

Like most family-run operations, every company witnesses the arrival of a new protagonist in the story. For Casadei it was appointment of Quinto and Flora’s son, Cesare Casadei, as the next creative director of the business. Cesare took office in 1994 to continue Casadei’s ongoing journey. Cesare’s first-hand experience in production amplified the promotion of their ‘Made In Italy’ brand image at an international level. Cesare’s arrival also marked the beginning of unisex styles. Subsequently, he also signed off the manufacturing of casual footwear, each spectacular in their own regard.

In early 2000s, the label made a decision to relocate its Milanese showroom to Via dell’Annunciata, that was eventually remodelled to become the Milan headquarter for the company. At this time, the brand became a favourite amongst a growing mass of celebrities. Hollywood’s A-listers were photographed wearing Casadei iconic creations, making the label become a significant name to be reckon with in the fashion circuit. Casadei also became a popular choice for various fashion publications when globally recognised photography talents shot the brand’s advertising campaigns.

In October 2002 the company, which employs 200 people, opened a new single-brand shop in the heart of London, at no. 12 Beauchamp Place, in the Knightsbridge section. In the firm’s worldwide activity, Italy is the second market after the U.S., and has 400 points-of-sale, 4 of which are single-brand shops (Milan, Florence, Rimini, and Ferrara). With Germany, it is the most important in Europe. Two more boutiques are opened in Russia, in St. Petersburg and Moscow. The company’s choices for expansion are supported by the excellent turnover, which in 2001 reached €32,604 million, an increase of 14.82% in comparison to the previous year.

The Federation Of Italian Footwear in 2004 launched a limited edition of postage stamps to celebrate and commemorate the legacy of Casadei. This very move reflected a mark of respect for an Italian label that represents the ideology of fashion forward footwear.

Casadei turned 50 in the year 2008. To commemorate the brand’s half a century worth of eye-catching designs and artisanal glory, photographer Ellen Von Unwerth was called on board. The result culminated itself in a grand book featuring Casadei’s footwear through the years, followed by an exhibition at Milan’s La Triennale. Together, they encompassed the celebratory tones of the brand’s golden jubilee.

With every progressing year the label opened its door to a new territory. The beginning of 2010s sees Casadei launching into a full throttle mode in the landscape of brand expansion, with the opening of boutiques in Rome, Cannes, Dubai, Casablanca and finally in New York. Apart from expansion, the year 2010 itself marked the momentous presentation of Casadei heels and shoes during the Milan Fashion Week.

After conquering the brick and mortar setups, the label discovered the digital world with the launch of their website in 2012, followed by the arrival of their e-commerce boutique in 2013.  Later in 2015, Cesare Casadei and Architect Marco Costanzi gave Milan its first footwear concept store, followed by the unveiling of a new boutique in the exclusive Albemarle Street, Mayfair London. In the same year, the company re-launches its online shopping portal, a step taken in the direction of establishing new aesthetics and vision.

Casadei kickstarted 2017 with the Super Bowl game in United States of America. Lady Gaga, who was chosen to deliver the prestigious half-time performance was spotted in the famous Casadei blade stilettos during the pre-game show. Also, Victoria Beckham is frequently seen wearing the Blade Stiletto, a favorite of celebrities because its claimed to be the comfiest of all brands.

Till date, Casadei continues to be a story of an entrepreneurial swiftness and smartness, one that is hallmarked by expert craftsmanship and well sought-out innovation. It is a testimony of Italian heritage and vision, all summed up with gracious use of vibrant colours, blended with artisanal values.