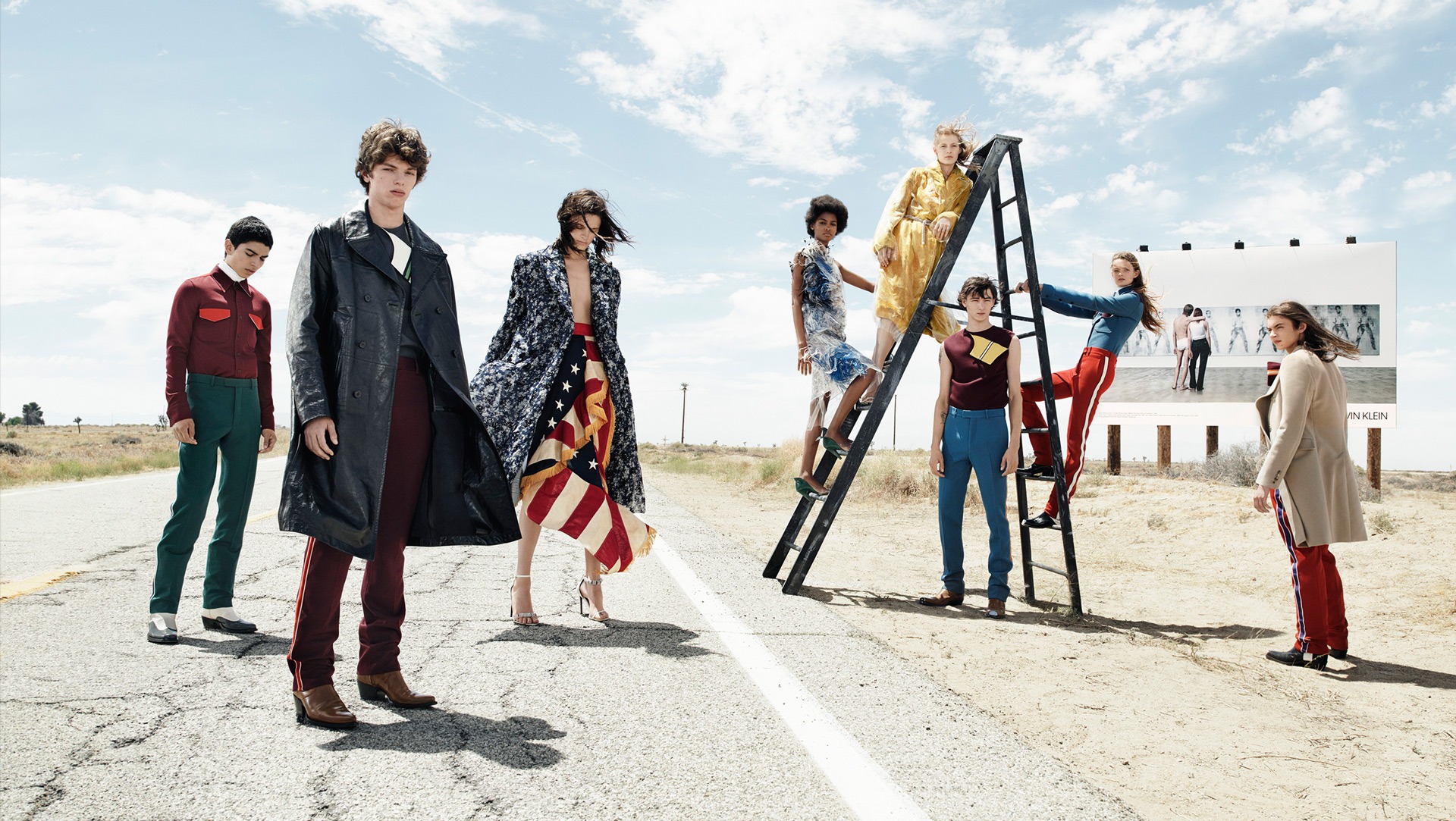 Calvin Klein is an American designer who founded the prêt-à-porter company carrying his name. In 1968 he opened Calvin Klein Limited, a coat shop in the York Hotel in New York City, with just $10,000. He comes from a family that owned drugstore in the Bronx. At school he made sketches of models in his math book and at home, after homework, he would practice sewing. Thus, having won over his parents’ resistance, he studied for a degree from the Fashion Institute of Technology in New York in 1962. With Barry Schwartz, a schoolmate of his and Ralph Lauren, who was also born in the Bronx, helped Klein build a fashion and perfume empire. During the beginning, Lauren spent his days showing around his tie catalogue to every department store buyer, but Klein carried his sketches in a small case.

After five years of apprenticeship in various companies, he started his own business, specializing for a few years in the design of suits and neatly cut overcoats. In his exhibitions there’s no sense of show business. Young, tall, attractive, and impeccably dressed, he was always present where it mattered. Klein was capable of partying hard at the weekends but of turning into a very precise manager on Monday mornings, his personal image is a strong feature of his success.

John Fairchild, the celebrated and feared editor of the only fashion newspaper (Womens Wear Daily), who could begin or end a designer, speaks of Klein as one of the world’s best designers. The writer claimed he is a real rarity in the panorama of American styling, which is characterized by an excellent cutting ability but little imagination. Also, Klein appeared on the September 1969 issue of Vogue magazine.

Not only does he have creative talent but also advertising wisdom. In 1971 he created a strong eroticism in the campaign for the famous K jeans, which featured a very young Brooke Shields in 1971. This was the year he introduced perfectly cut sportswear garments and practical coordinates into his collections. Such as sailors’ jackets, wraps in soft rustic fabric and with a fur collar, shirts in crepe-de-Chine, striped silken blouses, sweaters, and velvet suits. His style is always very simple. He likes shades that match overlaid garments.

Through the seasons his designs continued to create the unexpressed wishes of his clientele, which contributed to the growing success of the brand. He balanced simplicity and precious touches in a sophisticated game of harmonies. His clothes focus on practicality: no useless decorations, no frills, but an elegance that always brings a second look.

A new clothing line, CK, and an underwear line are sold through a huge distribution network, supported by advertising campaigns built around the daring photographs by Bruce Weber.

At this point Klein was a star and his brand was growing very quickly, but he was also struggling with private difficulties that constantly put him in danger. So, when he meet and married Kelly Rector this was a very important time for him. Kelly had left Ralph Lauren’s atelier, married Klein and brought order to his life. They had collaborated through the end of the 70s, which was his more sophisticated and feminine aspect of his second creative period. They worked together and increased the presence of evening dresses, and introduced a greater degree of gracefulness in the day clothes. In addition, very linear jackets with squared shoulders and tight at the hips, snug blazers and very studied, simple blouses; but without giving up the sober image stressed by the restrained use of expensive fabrics.

Klein owes the loyalty of his customers to his careful research, the lack of complicated decorations and accessories, and the way he made his clothes. He created a cut in a way to allow the maximum wearability that was ready for mass production. It is also due to the incomparable taste of his jeans, garments that for so long were considered extraneous to the fashion world.

Calvin Klein was the first designer to receive the awards for the men’s and women’s Collections from the Council Of Fashion Designers of America in the same year (1993). In 1973 he won the Coty Award which had never been presented to such a young designer.

Beginning in the 80s the brand had reached its most successful point and at this time Klein changed the American market of men’s underwear. He introduced a new clothing line CK that became a highly successful line of boxer shorts for women and a men’s underwear collection, which later grossed to $70 million in a single year. The new brand was supported by advertising campaigns built around the daring photographs by Bruce Weber.

During the 1990s Calvin Klein’s head of menswear design, John Varvatos invented a new type of men’s underwear called boxer briefs, a hybrid of boxer shorts and briefs. The series became famous through a series of 1992 print ads featuring Mark Wahlberg, and have been called “one of the greatest apparel revolutions of the century”.

In 1992, the company was close to filing for bankruptcy but remained untouched mainly due to success of the popular underwear, fragrances, and ck sportswear line. From 1997 a joint venture has linked the CK sportswear line with the Stefanel line of shops, which produces and distributes upon license in Europe and in the Middle East. Recently, it has launched a new children’s line in the European market, mixing American and European styles. Including basic jeans, denim jackets in different shades, and the permanently present T-shirts with the CK logo for little boys; and low-necked blouses or breathtaking shorts for little girls. The erotic advertising campaign that accompanied it stirred a scandal and the banning of the posters, with the accusation of being on the edge of pedophilia.

In 1999 the brand announced it was for sale for $1 billion, but over the months there were no offer so Klein decided to take it off the market. During the beginning of the 2000s the company marketed a limited edition of the unisex perfume cK One. The three bottles were designed by three urban artists: Delta, from Holland, who created a futurist line, the graffiti artist Espo, with his long-necked women, and Futura, from New York, with the mysteries of shadows. In the Calvin Klein empire, the perfumes represent 34% of the group’s total turnover.

By 2002 the company as a whole have a turnover of $3 billion a year. In December Calvin Klein Inc. was acquired by the clothing giant Phillips-Van Heusen for $430 million cash and shares. The potential royalties, which could be between $200 and $300 million, were to be deferred over the course of the years. Klein and his partner Barry Schwartz had already tried to sell the company in 2000, but were unsuccessful. Klein remains the design inspirer of the 12 different products, for the lines Calvin Klein Collection, Ck and cK Calvin Klein.

In  April 2003 the designer admitted in public to abuse of drugs and alcohol and declared he wanted to seek a cure. He had a history of drug use, and in 1988 had been hospitalized for drug problems. Because of this, later certain terms of the license linking the Calvin Klein company (already acquired by Phillips-Van Heusen) to the Warnaco group were modified, and an agreement was signed for the beachwear line, which was to become effective from the beginning of 2004.

At the same time, Fingen Apparel, a licensee of Calvin Klein Jeans, created an under-16 division designed by the stylist. The designer, 60, announced that he was no longer to follow the collections closely, but that he was to have a consultancy role (in style/administration), in collaboration with Bruce Klatsky, President and CEO of Phillips-Van Heusen.

Later in October, Sara Dennis left her title as Senior Vice-President of the jeans, underwear, and swimwear sector of Calvin Klein to move to Liz Claiborne, a New York company quoted on the Stock Exchange. It was also announced that Phillips-Van Heusen intended to relaunch the clothing line cK Calvin Klein in Asia in 2004, following its suspension in the United States, Europe, and the Middle East because of poor results.

A fundamental element in this operation was the long-term license with cK 21 Hidungs Pte. Ltd for the men’s and women’s sportswear, menswear, men’s and women’s shoes, bags and small leather goods. This also favored the opening of stores and shops-in-shops in Singapore, Malaysia, Thailand, Hong Kong, and China, while franchised sales points were to be opened in Korea, Taiwan, and China. By December the first American Calvin Klein Underwear Store was opened in Prince Street, New York: a large space for men’s and women’s underwear and fragrances.

In January 2004 a contract was signed with the Swatch Group for the worldwide launch of a Collection of bijoux and jewels. Then in March, Robert Mazzoli became Warnaco’s Chief Creative Officer and was to control the underwear collections bearing the Calvin Klein brand name.

In November 2004 Calvin Klein Inc. elected Giuseppe Rossi as General Manager and General Director of Calvin Klein Europe. During his reign the first Italian Calvin Klein Collection store was opened in Rome. On three floors, the interior décor was by RetailDesign and the architect Paolo Lucchetta, who took inspiration from the work of John Pawson for the flagship stores of New York and Paris.

In February 2005, the Italian shoe factory Rodolfo Zengarini, from Montegranaro, obtained the license for the production and distribution of the women’s shoe Collection. Zengarini, already licensee of the men’s line, replaced Rossimoda.

Through 2005 there were many store opening including the first was the store in Dubai’s Wafi Mall, in partnership with Belbadi Fashion, where every article manufactured by the Calvin Klein empire can be bought. The own-brand store Calvin Klein Collection was opened in Italy, on Corso Matteotti on the corner with Via S. Pietro all’Orto in Milan. Also, Calvin Klein concluded an agreement with Finger for the opening of 50 freestanding ck Calvin Klein stores in Europe and the Middle East, and with Warnaco for the women’s swimwear.

In June Kevin Carrigan was appointed Creative Director and was responsible for the look of the men’s and women’s retail and wholesale activities, and of the design supervision for coats, jackets, hosiery, knitwear, handkerchiefs, ties, and umbrellas.

In 2006 Calvin Klein  releases the summer CK One fragrance, being this one of its best selling products. Inspired by ocean and beach, aiming at dynamic young urban consumers, this limited unisex fragrance is the third version of CK One collection.  After the success of summer CK One collection, more fragrances were launched in following years. In 2008 Euphoria eau de toilette was launched, following CK Free in 2009 and CK One Shock for man and woman in 2011.

In February of 2016 the company announced Raf Simons as new Chief Creative Officer of the brand, his minimalist and deep connection with youth culture is perfectly align with Calvin Klein brand. In addition, it states in the contract that Raf Simons will have complete creative control in everything, from brand image to all collections.

In February 2017, Raf Simons made his debut with men and women’s ready-to-wear fall  collection at Calvin Klein’s headquarter in New York. One month later, Calvin Klein unveiled a new logo through its Instagram account. The new logo is designed in collaboration with English art director and graphic designer Peter Saville. According to the brand, the new logo is a “a return to the spirit of the original”.

In April of 2017, Calvin Klein launched a new campaign directed by Sofia Coppola, for its underwear line. This new advertising is truly inspiring, it is featured in Lauren Hutton, a 73-year-old model and actress, and according to Vogue it proves “there is no age limit to being an underwear model”.