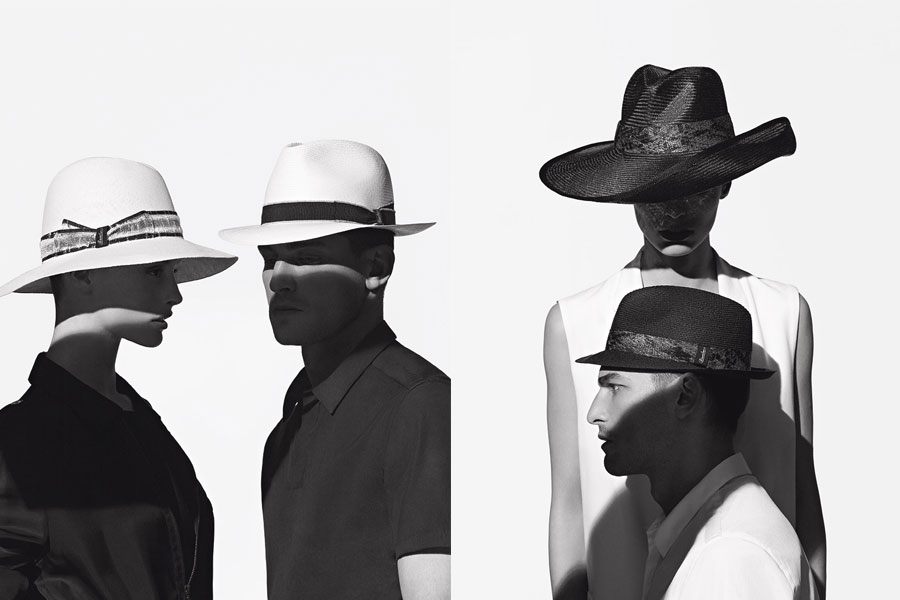 Giuseppe Borsalino (1834-1900) nicknamed “u siur Pipen” (Master Joe) toured through Italy and France to learn about the hat industry.  He earned a job at the Berteil hat factory in Rue du Temple, Paris, where he worked for around seven years before becoming a qualified master. Through this journey he gained informations and, in 1857, he established the Borsalino hat factory in Alessandria, Italy. He opened the first artisan workshop for the production of felt hats.

In 1897 the Master visits the Battersby hat-making factory in London and legend has it that “without being seen, he dips his handkerchief in a vat of “tar”, and takes back to Italy the English secret for making perfect bowler hats“.

The success continued after Giuseppe’s death, and his son Teresio (1867-1939) took over. At this time the company already had 1,000 workers and produced 750,000 pieces a year. Unfortunately, in the 1940s hat sales declined due to a loss of importance, so the company began to struggle.

Later, during the 1980s the company was completely restructured and began to manufacture a clothing line. Later, in December 1997 Borsalino Spa of Alessandria established Borsalino South, which in January 1998 acquired the hat factory Sabino D’Oria in Maglie.

Not just a hat, but the symbol of a style and world. Other hats with a similar shape are called Borsalinos, as are some obvious imitation. Synonymous with a certain style, this hat has been worn by very famous actors such as Bogart, Redford, and Sinatra and Marcello Mastroianni. In the seventies the company granted the use of its name to two cult films starring Alain Delon and Jean-Paul Belmondo: Borsalino (1970) and Borsalino & Co. (1974).

In the early 2000s, the Museo del Cappello was inaugurated, which was meant to enhance the history of the renowned hat through exhibitions, events and publications.

Felt models require more than 50 manual steps and 7 weeks of processing. Also, the straw models, which are manually intertwined, can take up to 6 months for each single hat.

On the other hand, Borsalino’s famous straw hat Panama was created in 1835, and it has turned into a timeless legend. Borsalino artisans need six months to finish just one Panama hat, and only using vegetable fibers of the Toquilla palm.

During the following years, the aim of the brand was to enlarge its production by introducing shoes, helmets and even a kids line. Moreover, Borsalino initiated  collaborations with other brands such as Italian Indipendent, Marcorossi and Brands O.I.

The company has new branches in the USA and Europe. Borsalino Fedora hats are very popular among Orthodox Jews and are the largest suppliers to Jews in the United States. In spring 2006 a specific museum was inaugurated with the Alessandria Municipality partnership, to remember the historical steps that characterize the Borsalino company.

2013 marks the beginning of the brand’s downfall; in fact, according to what the local newspapers declared at the time, the brand was accused of evading taxes. This was due to a great number of unregistered sales, that gave a total of €4 million without counting another €2.2 million of Iva. From that moment to date, the brand has been looking for new investors that can provide new capital in order to restore the huge debt. The crisis is still persisting at the beginning of 2017.

Since 2016, the company has been managed by a participated fund of Italian and foreign investors, with the aim of developing the brand internationally and strengthening its role as a protagonist in the world of craft luxury.

September 2016 Borsalino announced their collaboration with Nick Fouquet. He created two exclusive capsule collections, one for SS17 and one for FW17 season, dedicated to both men and women. The collections blend Borsalino iconic flair with Fouquet’s flamboyant soul, in order to deliver something original and unique to all hat lovers.

The company currently produces a wide variety of products such as hats, ties, clothing, watches, perfumes and even old fashioned bicycles, and the company tries to keep all the charm and class from last century’s fashion. 2017 marks the 160 years anniversary of Borsalino, to celebrates industrial excellency, Italian Ministry of Economy launched an official stamp on April 4th.

Following the entry of new management at Borsalino, they unveiled their new collection for spring summer 2020. For this line, the inspiration was taken from the arts and crafts movement, a period thats special to the evolution of the brand.

After a long and tedious legal fight for ownership, Borsalino’s new chairman Haeres Equita and executive chairman Philippe Camperio’s efforts to resurge the brand were dampened. Despite the slowdown, Borsalino is geared for a solid relaunch. With market expansions in USA and china, along with the launch of their online store, the strategy aimed to position Borsalino as a market leader for hats. Borsalino’s new strategy moves away from traditional fashion schedules to a multiple capsule collection format, aiding the efficiency and sustainability of their production cycles.