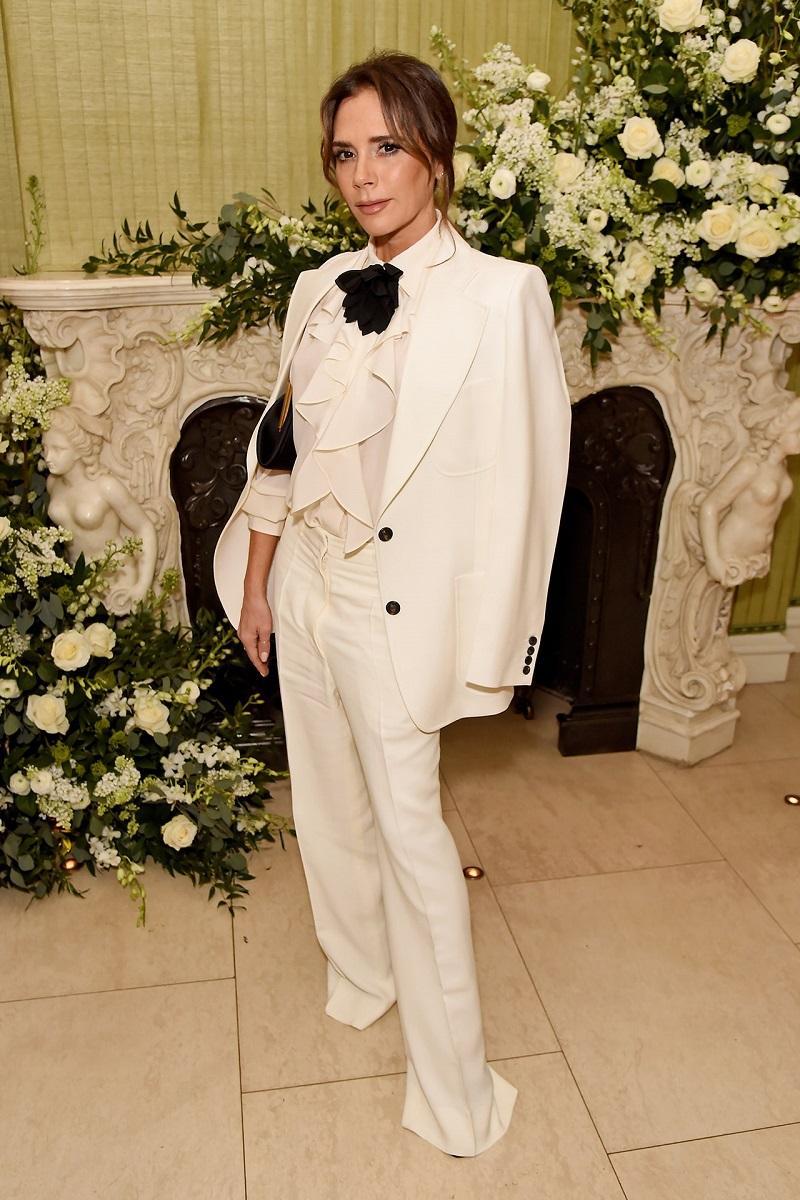 Victoria Beckham. Victoria Caroline Adams, British fashion designer, singer and model was born in Goff’s Oak in Hertfordshire in England, on the 17th of April 1974. She became famous at twenty years old, when she answered to an ad in the newspaper regarding the search for singers with her friend Emma Bunton.

THE DEBUT IN MUSIC: POSH SPICE IS BORN

In 2014 Imran Amed, Business of Fashion CEO, held an interview with Victoria Beckham who was a rising star of fashion design at the time. She stated that she had never been a model student nor the most talented one during her studies at the drama school. “I always had to work to get what I want” said the designer “I’m not sitting on the sidelines waiting for things to come to me, I get up and take them”. Answering the musical band ad on the newspaper was the spark that ignited her career. 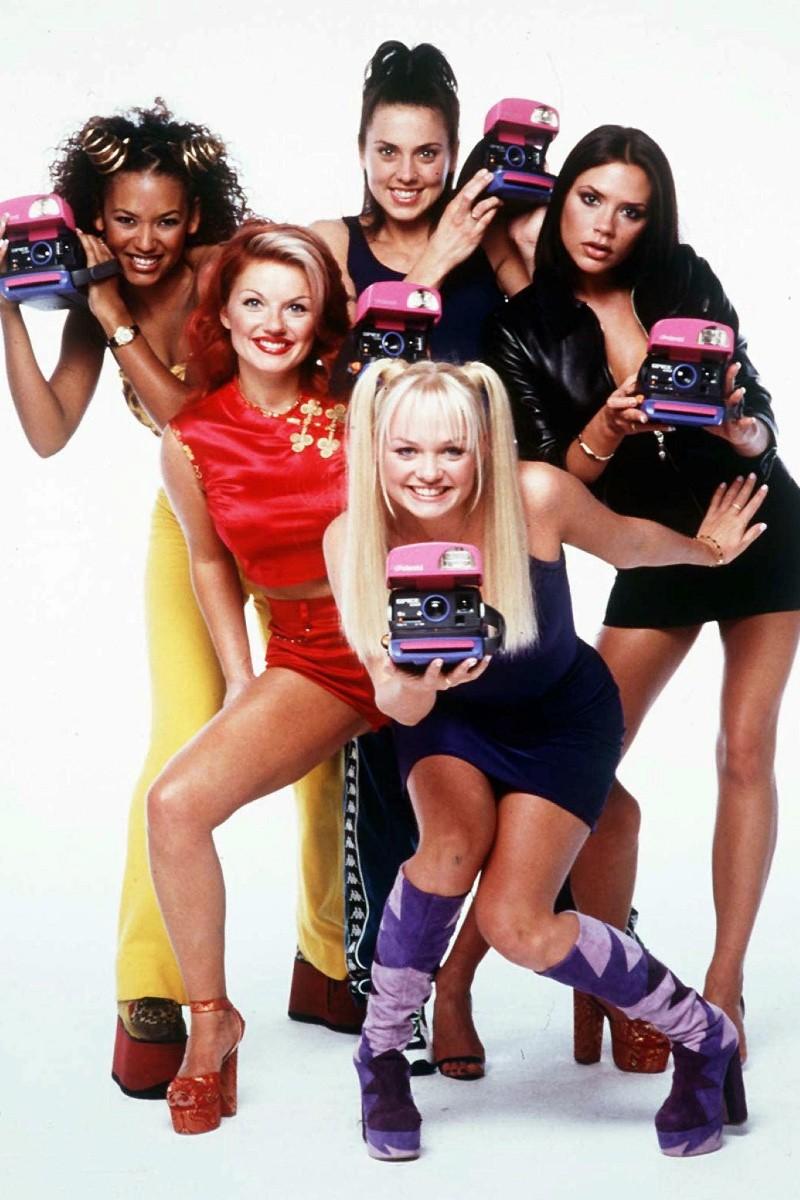 In 1994 the Spice Girls pop group was born, formed by Geri Halliwell, Melanie Brown, Emma Bunton, Melanie Chisholm and Victoria Beckham called Posh Spice for her refined looks and snobbish attitude. In 1996 the debut album with the single Wannabe was released, which sold about 20 million copies. In just a few years the group reached the heights of the music charts consecrating itself as one of the most famous cultural phenomena in the world of pop music.

However, the Spice Girls success wore out in a few years, in 2000 the group releases the third and final album Forever. The disbanded group appeared united again on stage in 2007, in 2012 at the London Olympics and in 2019, but without Victoria Beckham.

THE ENCOUNTER WITH DAVID BECKHAM, THE LANDING IN THE WORLD OF FASHION

In 1997 Victoria Adams met the football player David Beckham, with whom she started a solid and lasting relationship. In 1999 their first son, Brooklyn, was born. Four years after his birth, Posh and Becks, as they were called by the media, got married in a castle just outside Dublin. The couple had other three children, Romeo (2002), Cruz (2005) and Harper (2011). 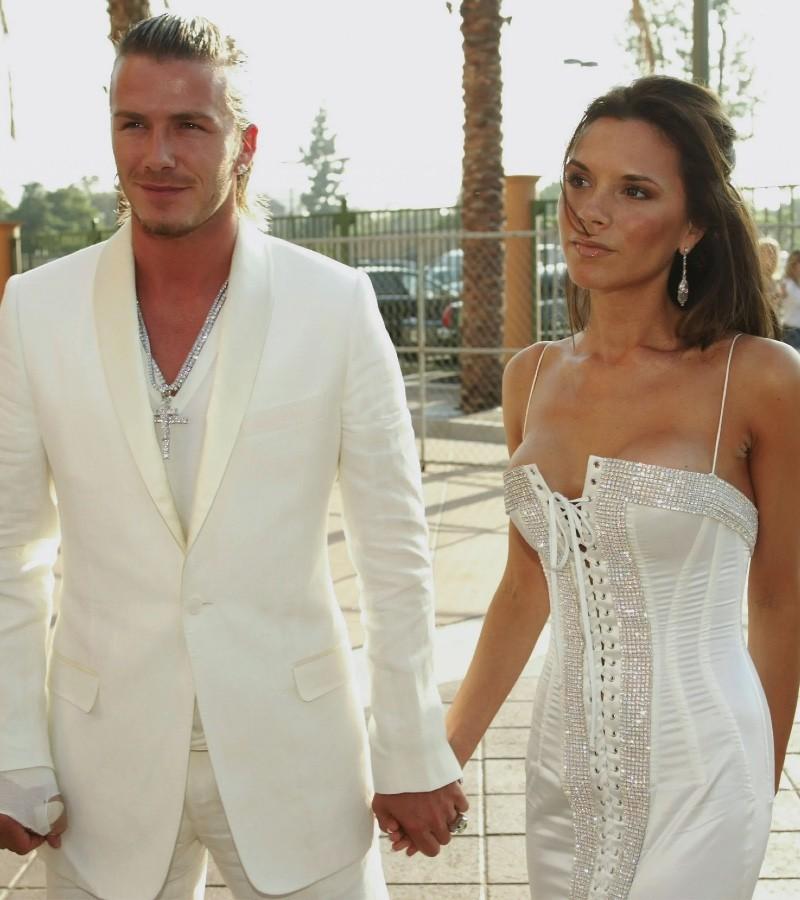 After the Spice Girls, the designer took her first steps in a solo career, with the album Learning to Fly which, however, did not reach the top of the international charts, followed by two albums which were never released. The designer also appeared in television, in the documentaries Being Victoria Beckham (2002), The Real Beckhams (2003), and Victoria Beckham: Coming to America (2007).

In 2006, the publication That Extra Half an Inch: Hair, Heels, and Everything in Between came out, a book in which the designer offers style advice. Two years later, in 2008, the debut collection in ready-to-wear arrived, presented at the New York Fashion Week. The collection consisted of precious fabrics, organza, silk, navy, and was characterized by enveloping and tight silhouettes.

In 2011, the designer presented her 10-piece ready-to-wear collection at the New York Fashion Week. The collection was acclaimed by critics, who especially enhanced its humble and restrained atmosphere, without the celebrity glitz that it could have afforded. In the same year, Beckham won the award for Designer of the Year at the British Fashion Awards. It was the beginning of a long series of successes for the brand, which over time consolidated a recognizable and well-defined style. 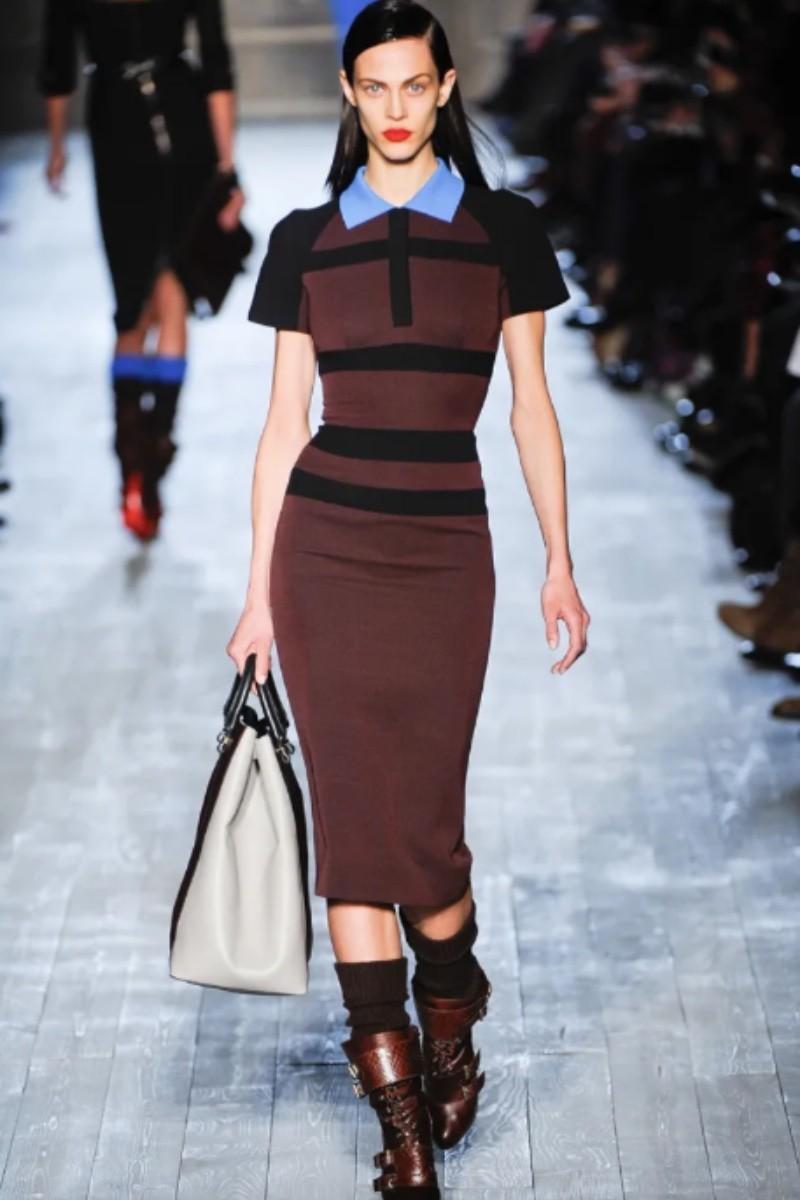 In 2013, she launched her e-commerce site, which hosted the Icon collections, the most famous pieces of her archives, the line of accessories, enriched by the collection of bags from the autumn-winter 13/14 collection, the eyewear collection and the new Victoria line by Victoria Beckham. The following year, Beckham further consolidated her rising empire, with the first London store on Dover Street. Also in 2014, the fashion house won the award for best brand of the year at the British Fashion Awards. The awards certainly did not end there, just the following year, in 2015, Beckham won the Best Luxury Brand of The Year at the Walpole Awards.

The first collaboration on a make-up line with Estée Lauder dates back to 2016, and was also renewed the following year. In 2017, the designer was awarded an OBE by Queen Elizabeth II for her service in the British fashion world.

In 2019 Marie LeBlanc de Reynies became CEO of the company after Paolo Riva, who joined VB in 2018 and remained in office for less than a year. LeBlanc de Reynies took over from Ralph Toledano, who had held the interim office prior to his appointment.

The Victoria Beckham brand currently has two ready-to-wear lines, a collection of footwear, eyewear and accessories, and products made in partnership with Reebok. Since the years of its consolidation in the world of fashion business, the British brand has established itself for its minimal and chic taste, for its versatility towards the challenges of the contemporary world, with a touch of urban and functionality to balance the creations. 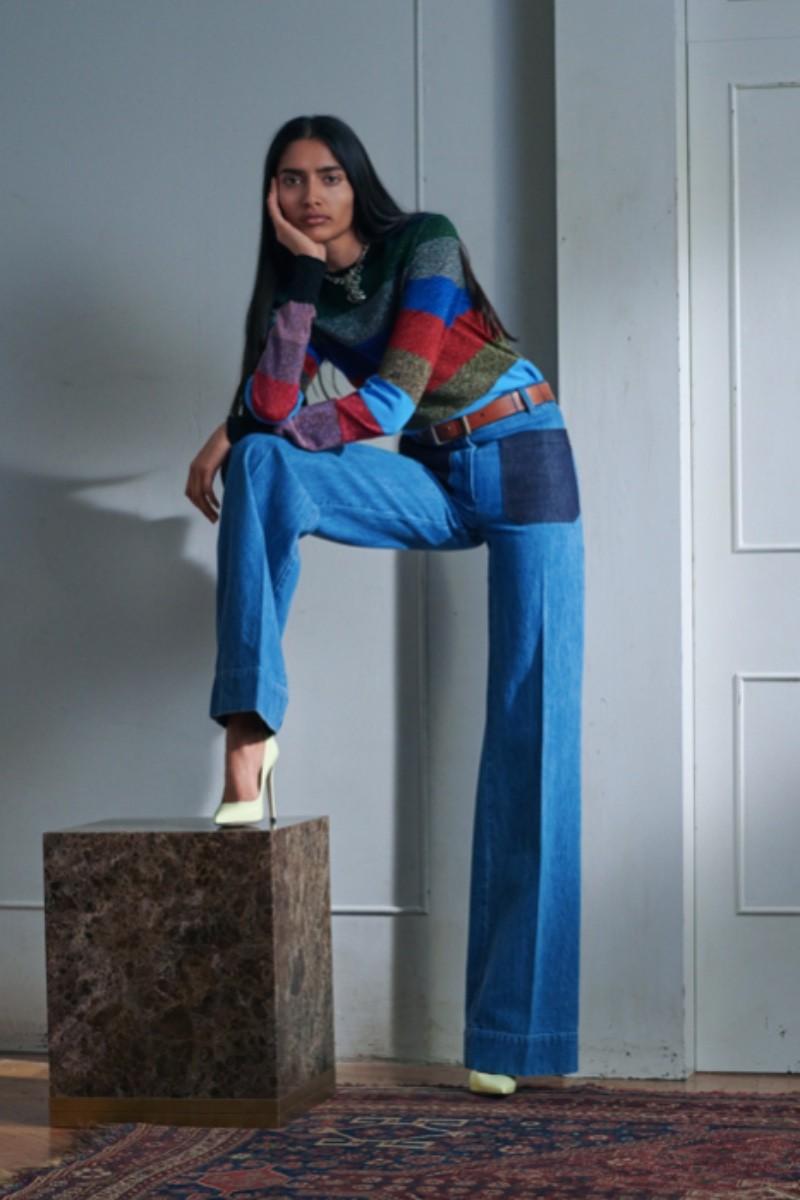 The research of materials and the craftsmanship of the manufacturing give the brand a luxurious and sophisticated imprint. In 2019, the designer definitively eliminated exotic leathers from her collections, directing the brand towards a sustainable path. In the same year her sustainable project also included make-up. From the packaging to the formulas used, the new make-up line Victoria Beckham Beauty reflects the designer’s interest in today’s social and environmental issues.

THE BRAND’S STRUCTURE AFTER THE COVID-19 PANDEMIC

Following the 2020 lockdown to stem the coronavirus pandemic, the designer rethought the structure of her brand. Expressing the will to return to a more intimate atmosphere as with the first New York shows, Beckham announced that she planned to reduce her staff by 20%, while the Dover Street store and Wholesale channels continued to remain strong points for the finances of the brand. The stock was reduced by 30-40%, the primary and VVB collection were compressed into one presentation per season. 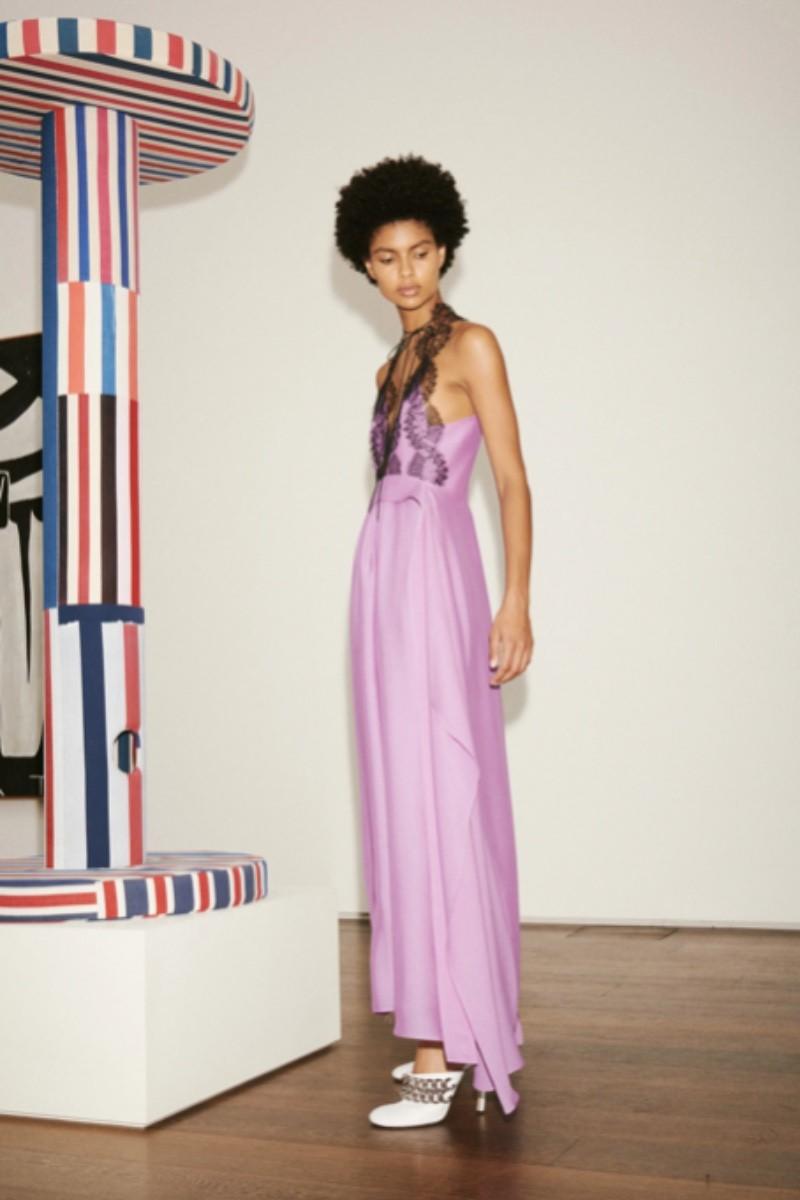 The launch of the Beauty line, however, had a negative impact on the fiscal year, a trend already highlighted in 2018, when the company had recorded a decline in revenues from 41.7 to 35 million pounds. Net losses in 2019 reached 16.5 million pounds, and in 2020 the trend was further penalized by the health emergency.In 2021, the debts amounted to 63 million dollars (56.5 million euros). According to reports from the Daily Mail, David Beckham expressed his skepticism regarding the possibility of continuing to invest in a hard-hit business, which no longer responds positively to expectations.